Highlighting the persistent heat and little rainfall of the last 6 weeks would not be a typical way to start an article about flooding – but drought periods and flood events are intimately linked. In this blog, we discuss how this glorious weather could be lulling us into a false sense of security.

The grass has turned brown, the soil is bone dry and cracks are appearing all over the lawn. We tend to lap this kind of weather up, but extended periods of drought can contribute to soil erosion.

Drought can kill off vegetation, which normally would help hold soil together in conditions like high winds or heavy rains. If the vegetation dries out completely to the point that even the plant’s root systems die, the soil is exposed.

It is also possible dry vegetation can be ignited, and fire can strip even the last remnant of plant cover from the ground. We have seen this very much in evidence across the moors of the Pennines this summer.

Dry soil is also much lighter, and less cohesive, resulting in even more likelihood the wind or rains will erode it.

Poor soil means poor root systems, which equals loose, almost sand-like dirt that can’t absorb water in a useful way. This means that the water will simply rush through a field, rather than steadily seep through healthy soil and recharge the groundwater supply.

We seem to swoop from periods of extreme weather. While 2018 will be notable for its incredibly long cold winter and early spring, the long hot spell since May will leave many confounded as to what’s next.

But science points to reasons why. Recent research suggests that the polar jet stream has been fluctuating more than normal as it passes over the parts of the Northern Hemisphere, affecting our weather in turn. This meandering stream and its fluctuations determines how warm or wet our weather will be.

Reminders from our recent past

2018 could have many comparisons to 2012, but just at different times of the year. 2012 witnessed the second driest January‐March for England and Wales since 1953 and thence the wettest nine‐month sequence (for any start month) in the 250‐year rainfall recording series. Such dramatic partitioning of the annual rainfall total is exceptionally rare.

The abrupt change in weather patterns and jet stream position across the UK in 2012 could simply have reflected the natural variability of the UK climate. A multitude of influences from both the north Atlantic, tropical weather patterns, as well as the El Niño current, may have also affected northern Europe. The possible influences from 20th century global warming, a warming Arctic, and associated loss of sea ice, are also active areas of research.

As we have already discussed, baked compacted earth is not good for containing the first localised heavy downpours that will come when the jet stream shifts again and brings the first storm systems in.  Surface water run-off will be rapid, stripping the topsoil and channelling into rivers and streams with little chance of soaking into the ground locally.

The Pennine forest fires have stripped heather away which will reduce the ability of upland streams to be able to hold onto the rain and slow the flow before it descends to urban areas.

It’s this rapid onset of surface flooding that places stress on buildings, roads and railways. This US video is an extreme example of the erosive effects of flooding, but it can and does happen here every year in the UK.

A weakness in the rock strata, especially in chalk, limestone and past shallow mining areas, together with loose friable topsoil, could be eroded rapidly under extreme surface flooding incidents, creating sinkhole and cavity threats that could easily undermine roads, vulnerable properties and other critical infrastructure.

Understanding how these climate impacts could affect your clients’ property now and in the future should therefore be a key factor in environmental due diligence ahead of the transaction.

Your client is buying increasingly for the long term and so a full appraisal of its exposure to flood and ground stability risk must be given.

Future Climate Info reports are built on innovation driven by climate change. Our concise, easy to understand Standard Environmental Report covers both flood AND potential ground stability risks at the property level for just £45.00 plus VAT.

This article was published by Future Climate Info as part of their advertising agreement with Today’s Conveyancer. 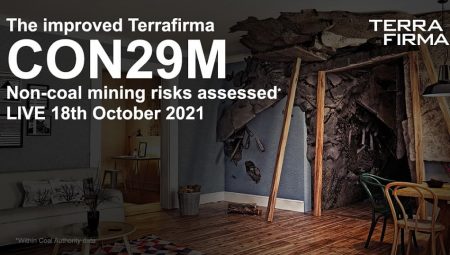