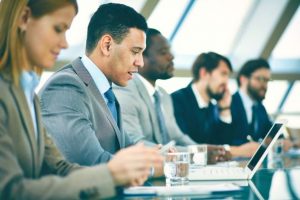 Index Property Information has been sponsoring the Surrey Law Society for a number of years now and one of the benefits of doing so is the annual invitation to Chair the Conveyancing and Land Law Conference which, this year, took place at GLive on Tuesday 30th October.  It’s a role that I thoroughly look forward to and enjoy; it’s a great opportunity for Surrey based conveyancing professionals to catch up on the latest news, share knowledge and experience and come together around common causes.

Surrey Law Society clearly put on a proper event though as, this year, there were also delegates from other parts of the country that have heard of our reputation for finding the very best speakers and dealing with the topical, and sometimes challenging, issues in the industry.  There is no question that as well as learning many new things and cementing knowledge in other areas, there was some pretty lively debate – of which, more later!

First taxi off the rank this year was Rob Hailstone founder of the Bold Legal Group.  Conceived in 2010, BLG is designed to enable conveyancing solicitors to remain as well informed as possible, in an environment that is constantly changing and doing so rapidly.  The timely sharing of information through a regular news bulletin provides the conveyancer with a 24/7 ‘eyes and ears’ service but, more than this, it also acts as a forum for difficult questions to be raised and answered.

As to be expected, Rob dealt with many of the topical issues of the day and engaged the audience in debate on some of the thornier problems.  As was the case throughout the day, it was during the interactive phases of Rob’s presentation that best value was to be found.  The BLG concept is a good one but it does rely on two-way participation and I’m sure that Rob will have taken away as much useful knowledge and information as he imparted.

When it comes to matters of tax and, particularly, Stamp Duty Land Tax, Paul Clark is the ‘go-to’ guy!  Paul’s background is commercial property law but he has made taxation a core skill; he is a member of the Stamp Taxes Practitioners Group and regularly lectures on the subject.  Latterly at Linklaters (12 years) and DJ Freeman (18 years and head of property), his passion is for plain language in the law.

In the case of SDLT, which replaced stamp duty in 2003, its complexities, and the challenges created by HMRC’s interpretation of the relevant legislation, have only grown over time.  On 25 November 2015 the Chancellor announced a 3% surcharge on additional homes and on all dwellings bought by non-human buyers, such as companies.  Paul brought light to the darkness for our audience on this subject and also dealt effectively with the other compelling topic, first Time Buyer Relief.  Clearly there’s a dichotomy between plain language and all matters ‘tax’ but Paul’s insight was extraordinarily valuable and he got his messages across in an easily digestible form!

Also easily digested was a very pleasant lunch that we enjoyed on the Mezzanine Level at GLive where conversation and debate continued.  Coffee and petit fours didn’t hold up proceedings though and whilst the next speakers topic could easily have brought on indigestion, instead he brought humour and insight into cyber crime.

Robin Yellow has been developing systems and processes for some of the biggest names in UK industry since 1995 and his knowledge of the increasingly sophisticated tactics deployed by national, international, amateur and professional thieves is remarkable.  He offered insights into Phishing (including Whaling!), Vishing, Smishing and WannaCry – by the end of the presentation, many wanted to do just that but at least they understood why!  Cyber Crime is probably one of the biggest threats in our industry but with experts like Robin able to share their knowledge and experience, we all become better informed and, perhaps, just a little more switched on and savvy.

The penultimate presentation was, by some considerable margin, the liveliest of the day as both the SRA and The Law Society tried to explain the rationale behind new rules governing pricing and transparency in the industry.

Effective 6th December 2018, the rules require all regulated law firms, and individual freelance solicitors who market their business services, to publish information on the prices they charge.  The rules have been been designed to make sure consumers have the information they need to make an informed choice of legal services provider, including understanding what the costs may be.  Now this is all very laudable but as the collective demonstrated to both the SRA and the Law Society – it’s just not quite as simple as it sounds!

We all like to pay the lowest possible price for the best possible goods and services, that’s an understandable human trait.  The problem with conveyancing matters is that the scope of work can’t possibly be understood without all the facts and there are myriad scenarios that will affect the cost of delivering the right outcome.  If a customer believes that they have a ‘fixed’ price then, irrespective, that’s what they will expect to pay… and any that are challenged on this will feel aggrieved and the number of complaints will inevitably increase.  This isn’t a situation that will help with anybody’s blood pressure!

QC opinion points to SRA guidance that the rules do not require solicitors to publish information addressing each and every possible scenario and so might discharge their obligations either by stating a range of costs, or an average, or an average plus a starting point.  It would seem to be enough for them to address transactions of an unexceptional nature, as long as it is made clear that this is the position and that additional charges would be made for non-routine cases or transactions.

No doubt some imaginative solutions will be found to this challenge but it strikes me, and everyone that was in the room, that this particular governance initiative was aimed at the wrong target!

Last but not least was the inimitable Richard Snape.  As usual, without slides but with pathos, anecdotes and humour he delivered an hour’s worth of gold dust.  On this occasion he dealt with ground rent, service charge & estate rent charge issues in conveyancing.

Richard enjoys a national reputation for lecturing on a range of property law topics. He has trained the legal and estates staff of clients, including institutions, corporates and developers, and is praised for his ability to explain complex property concepts in a straightforward and entertaining way that is tailored to the needs of his audience.  He didn’t disappoint.

At the end of a thoroughly insightful day, it merely remained for me to wrap up, thank the speakers and put away the tables and chairs until next year when, again, Surrey Law Society is sure to put on another popular, relevant and well-attended conference.