Regulator and Landfill Operator told to Improve in Key Judgement 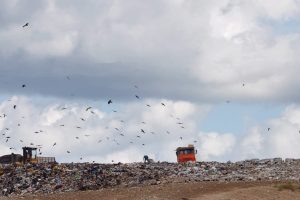 Campaigners, Stop the Stink, have won their High Court case against the Environment Agency (EA) and Walley Quarry Ltd in Silverdale near Newcastle-under-Lyme, proving it to be a source of noxious gases including hydrogen sulphide (H2S) that has directly harmed the local community.

The Judge, Mr Justice Fordham ruled that the gases had the potential to shorten the life of 5 year old Mathew Richards who suffers from bronchopulmonary dysplasia (BPD).

The case largely hinged on whether the EA was fulfilling its statutory duty to protect Mathew’s Article 2 right to life and his Article 8 right to respect for private and family life, under the Human Rights Act. Medical expert Dr Ian Sinha from Alder Hey Children’s Hospital argued that Mathew’s non-recovery from BPD was caused by chronic exposure to H2S and that he could go on to develop chronic obstructive pulmonary disease as result.

Mr Justice Fordham ruled that Matthew’s BPD was  “an inevitable precursor” to a serious illness reducing life expectancy, “attributable to the ongoing exposure to hydrogen sulphide emissions from the quarry at current levels, against which the EA has the powers to protect.”

He ruled that a ‘positive operational duty’, in relation to both Article 2 and Article 8, had been triggered in this case.

This highlights the shortfall in regulatory rigour and seeks that the EA enforces a reduction in hydrogen sulphide levels to less than an eighth of current levels by January 2022. It is important to stress that the EA was not found in breach of its legal obligations, as it seeks to act on advice and assessment from Public Health England.

This follows on from a number of previous interventions intended to bring the regulator and operator into line. In July, when Newcastle-under-Lyme Borough Council identified the site as a statutory nuisance and the Council allocated a £1million fund to fight and enabled abatement notice to be issued. This was brought about in response to over 1000 complaints in a single week. Prior to this in May the former health secretary Matt Hancock is reported to have written to the EA with ‘grave concerns’ over the site.

The problem is understood to be two breaches of the site’s environmental permit. These relate to the “insufficient covering of tipped materials at the end of the working day”, and “odour outside the site at a level likely to cause pollution, as perceived by an authorised officer, in the absence of appropriate measures to prevent and minimise odour”, the EA statement said.

In response to the ruling, an Environment Agency spokesperson said:

“We have every sympathy with the local community, who should not have to live with the distress caused by landfill gas being released from Walleys Quarry…..

“We have a dedicated team working closely with our partners through a multi-agency forum to resolve the issues and to improve the situation for local people. We will continue to use our regulatory powers to require Walleys Quarry Ltd to bring hydrogen sulphide emissions under control.

We will seek to appeal some aspects of the judgment relating to the role of the Court. This in no way affects or changes our determination to tackle the problems at this site in the interests of the Claimant, the community and the environment.”

Campaigners and residents have welcomed the judgment. They have been plagued by bad smells and fumes for months, which have caused headaches, itchy eyes and have in some cases worsened respiratory asthma.

All eyes are now on how effectively the EA can enforce regulation and direct Walleys Quarry Ltd to adapt its operation to reduce emissions. The regulator remains under significant funding pressure with its regulatory powers.

Last year as reported by The Times, the EA chair Emma Howard-Boyd wrote to the Environment Secretary, George Eustace highlighting that regulatory funding had been cut by half and it’s “capacity to visit and tackle polluting businesses is now significantly reduced and that it “now has only the resources to attend the most serious environmental incidents.”

While Walleys Quarry is firmly in this category, this judgement, unusually served under Human Rights Legislation, may open the door to new cases being brought forward, placing the regulatory regime under further pressure.