Nottingham: The house of caves 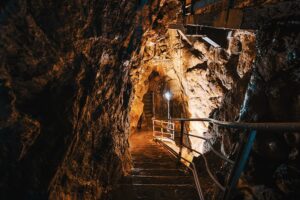 Tig Guocobauc, or House of Caves as it translates, was the name given to the city of Nottingham by the chronicler to Alfred the Great in the year 893 A.D. For many of the city’s inhabitants, it is something they are quite proud of.  It helps make the city what it is today and forms part of their very heritage and history.

The caves were used for a variety of everyday tasks during Nottingham’s earliest occupancy. Things like storing beer, making malt, tanning animal hides and in more recent years, being used as air raid shelters during The Blitz in the Second World War. They can be found all over the city but are primarily found near the centre, dug into the native sandstone beneath houses, pubs, gardens and a variety of other places.

A City Built into its Caverns

Our Business Development Manager Patrick Hepple, who grew up in Nottingham, commented that:

“Not all homes, or buildings have caves in Nottingham, but you know about the caves from an early age, whether it is visiting the caves as a kid or going to raves in them as a teenager. They are set into two hills, one with Nottingham Castle on which is opposite another hill where the lace market is. There are a number of bars and restaurants built into the sandstone which makes them a unique experience. I used to give Gin tasting sessions in the caves underneath the Victorian music hall.

My brother once lived in a house called Lord Byron’s, after the infamous poet who once lived there. This old Georgian house had a network of caves which still had an old safe, full of damp financial documents, further into the earth there was a carved staircase which led to a large seating area for around 10 people.

These caves are quite extensive and once all the bars in that area surrounding the town square all shared a cave which was a communal beer cellar. Sadly, now, all the caves I know about are fenced off, which may make the caves less well known by future generations.”

Hundreds of these caves have been discovered, some dating back as far as the 12th Century. There have been extensive efforts from local councils, archaeologists and curious individuals to record these structures and for some of them, we have a pretty good record of where they are and their extent. Having said that, it seems that more are appearing almost every year. Through development and building works, these old caves have been broken into or rediscovered, seen for the first time in hundreds of years.

But there also remains a number of subsurface excavations, recorded in various sources as caves which are actually sand mines. This indicates there are almost certainly more caves and therefore possibly more mines beneath the city than we know about today. However, records of these features cannot be taken at face value. This means that any development close to the city centre, whether commercial or new build housing, needs thorough professional evaluation and research ahead of breaking ground to assess any ground stability risk.

A potential labyrinth of tunnels and informal entrances could lie in wait as the next discovery, sat under prime sites earmarked for redevelopment. Climate change is driving locally heavy rainfall events that percolate into the softer bedrock below and could erode features already compromised by excavation.

Scott Lomax is Nottingham City Council’s Archaeologist and has an intimate knowledge of the cave system and its vulnerabilities:

“In the summer 2020, a new cave was discovered after a sinkhole appeared in a back garden following the heavy rain from storms earlier in the year. Investigations had to be put off because of the pandemic, but it had exposed a rock-cut shaft, with tool marks visible, which was roughly square shaped in plan. A large amount of the garden above had disappeared into the shaft, raising the possibility this was a cave and not simply a deeply cut pit.

In December 2020, collapsed material from the property in Friar Lane was removed and revealed a chamber leading off the shaft at a depth of approximately 4m below ground level. The cave must predate the 19th century building at the site, given the position of the shaft, and is probably much older than that.”

Known for Coal – but Not the Whole Story

The caves, tunnels and mine shafts in Central Nottingham are carved out of the city’s rich sandstone deposits. You can imagine artisans making beer below the now-bustling streets, or to try and comprehend the strength and solidarity of the local community as they sheltered within the safety of the native rock whilst tons of bombs were dropped during Second World War air raids. But that was then and this is now – the utility and protection could be a new, very modern risk.

The problem is that Nottingham and the wider county are synonymous with the legacy of coal mining and property searches have focused on this as the apparent ground stability risk by conveyancers for their clients for many years.

There are extensive coal deposits and shafts across whole swathes of the city – some of the well known being Gedling to the east and Cinderhill near Bulwell to the North West. These were deep workings, sometimes 150m below the city, on top of which large housing estates were built in places like Radford, Babbington and Wollaton. These are understood and identified by CON29M searches backed by compensation for remediation of any subsidence directly caused by a former coal mine shaft entrance or adit.

However, many of the informal, shallower sandstone mines and their entrances were not recorded and given their age and the gaps in information, we cannot be certain in 100% of cases. These features connect to the surface via stepped inclines, horizontal tunnels or in rare cases, shafts, some of which have long been infilled or forgotten about.

The structural stability and integrity of these features cannot be assumed to be adequate. They remain as a void beneath the ground – man-made excavations beneath a heavily inhabited city. They lie under houses, pubs, in gardens, industrial units, under major streets. They are a part of Nottingham’s great history, but must be carefully considered in the present and future.

In our recent white paper on the risks posed by non-coal mining hazards in major cities, we identified that more than 70,000 properties or 41% could be affected. CON29M searches will only search for other minerals that are in the same seam or shaft and not look beyond this for other non-coal mineral mining, leaving a crucial gap in understanding for typical searches ordered in the area.

A Better Understanding Below Ground

When assessing ground stability, especially when relating to property, it is critical to have a thorough understanding of regional mining practices. Our Mining Consultants conduct extensive research to familiarise themselves with these regional differences and by doing so, benefit from a wider appreciation of what lies beneath the surface throughout the UK.

Our historic land use data, alongside our suite of historic Ordnance Survey mapping, paper geological mapping with countless handwritten annotations and unrivalled archive of the caves themselves, allows us to hone in on the true risk of these features.

Our Mining Consultancy Team have conducted their own research into the Nottingham mines and backed with cartographic and documentary evidence, we can assess what is going on below ground in far superior detail.

So, if you order an Avista report from Groundsure, not only do you get ten environmental searches including contaminated land, flooding and natural ground stability, but mining of ALL types including coal AND non-coal minerals like the sandstone in Nottingham.

And not only that, you can access our expert mining consultancy team on your client’s specific site, property or development opportunity to see how it could be impacted, or indeed if the risk can be mitigated.