A hole lotta trouble in London 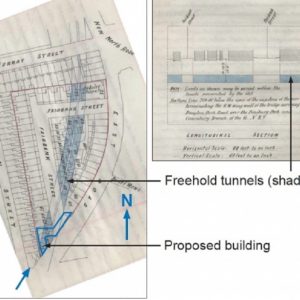 Another incident involving development works and the London Underground occurred on Monday evening (22nd February 2016) when contractors drilled a hole through the roof of an underground tunnel just outside Shepherd’s Bush station. It is thought that contractors were working on an extension to the Westfield shopping centre. Passengers travelling on the Central Line faced huge disruption as the service was suspended between Marble Arch and White City.

At the time of writing (23/02/16) it is not yet known how this occurred but Transport for London (TfL) will be carrying out a full investigation.

This is the second event in recent years where construction works have penetrated through to rail lines beneath the City of London – fortunately, the public safety consequences of both events were negligible. On the 8th March 2013 10.02am a train driver of a First Capital Connect train from Moorgate to Welwyn Garden City reported that water was flowing from the roof of a railway tunnel between Old Street Station near central London and Essex Road Station on Network Rail’s Northern City Line.

At 10.58am a train which was not carrying passengers was used to examine the line. The driver reported that he had stopped short of the water flow in the tunnel and had seen two large drills had broken through the tunnel wall and subsequently fallen onto the track in front of the train. The drills were being used for boring piles from a construction site approximately 13m above the crown of the tunnel on East Road, Hackney. The drills had penetrated the cast iron tunnel lining before landing on the track.

Context – Network Rail’s Northern City Line (Moorgate to Finsbury Park Junction) carries passenger rail services between a below-ground terminus at Moorgate in the City of London, and Welwyn Garden City, Letchworth and Hertford North. The 2.7 mile long Moorgate tunnels were built between 1898 and 1904 by the Great Northern and City Railway company to link Moorgate and Finsbury Park on the Great Northern main line.

Piling work for a proposed seven storey residential building commenced on 6th March 2013, 2 days prior to the incident. During the boring of the 5th pile (out of 39), the piling rig’s auger broke through the cast iron lining of the tunnel below. The piling team were unaware that they had penetrated a tube tunnel and attempted to locate the missing section of auger by dropping metal bars down the hole. These bars also landed on the track.

The following causal factors have been identified:

a. the construction company did not appreciate the significance of an entry on the Land Registry Property Register;

b. searches undertaken on behalf of the Client prior to it purchasing the site did not include Network Rail;

c. a 1967 undertaking by the London Borough of Hackney, intended to give the tunnel owner the right to approve any proposed development, did not result in Network Rail being consulted before piling commenced;

d. the structural engineer and contractors did not identify that an obstruction found in an exploratory borehole was part of a railway tunnel;

e. pre-construction documentary searches did not detect the presence of the tunnels, or the need for additional searches, and;

f. the planning approval process did not recognise the tunnel risk.

The tunnel, in common with railway tunnels in urban areas, is omitted from most mapping, including all current and historic Ordnance Survey maps and plans.

As a result of this incident, The Council for Licensed Conveyancers issued a reminder on 7th April 2014 relating to transaction in central London, Newcastle and Glasgow stating that “Those commissioning searches for sites in inner London (including Docklands) should ensure that all searches consider Network Rail and Transport for London tunnels. Searches in central Newcastle should consider the Tyne and Wear Metro (Tyne and Wear Passenger Transport Executive) and in central Glasgow the Glasgow Subway (Strathclyde Partnership for Transport).”

In response to this Groundsure created the Groundsure Underground report designed specifically for conveyancers to ensure identification of the location and depth of existing and proposed London Underground lines, in addition to existing railway tracks and tunnels. In addition to this, our specialist report the Groundsure Geoinsight designed for surveyors, developers and environmental consultants not only identifies the location of existing and proposed tube lines, but also historic and abandoned railways and tunnels – something that does not appear on standard conveyancing searches or regular mapping.

This highlights the importance of interrogating all information sources prior to purchasing or developing property in an ever expanding London.