Grave Danger – Cemeteries As A Source Of Groundwater Pollution 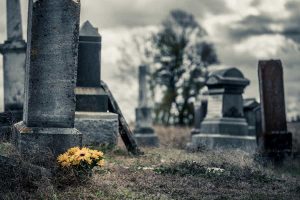 Graveyards have long been considered scary places thanks to the corpses beneath our feet, but probably not because of the contamination risk they can pose to groundwater.

A body might seem harmless (zombies excepted), but for those of us who choose to be buried, our bodies start to decompose within the ground and release around 30 to 40 litres of a concoction of water, ammoniacal nitrogen, organic matter and salts referred to as “necroleachate” [1] into the surrounding soil and groundwater.

But a whole lot more than a corpse gets buried: there’s also the coffin, which may have been treated with varnishes, sealers and preservatives [2]; embalming fluids, which previously contained arsenic and mercury and more recently formaldehyde (a known carcinogen); a variety of metals, including mercury from amalgam dental fillings and non-ferrous metals such as silver, platinum, palladium and cobalt from jewellery and orthopaedic implants [3]; fertilisers from the large amounts of landscaping undertaken at cemeteries [4]; chemical substances applied in chemotherapy; and pathogenic bacteria (such as E. coli) and viruses [5].

Cemeteries can then be considered landfills of sorts, as there is a higher than normal concentration of potentially contaminative materials located in one place. In general, the shorter the time over which burials occur and the higher the number of burials, the greater the risk of groundwater pollution [6]. The ground itself also plays a significant role – the geological and hydrogeological characteristics of the soil, including soil type, permeability and porosity, as well as the depth of the water table, all determine the ease and rate of release of contaminants to groundwater [7].

Groundwater is the most obvious receptor to potential contamination from cemeteries, since it is closest to the source. And as groundwater contributes around 30% of public water supply in England [8], it’s a resource to be protected. For this reason, there are specific restrictions for where a cemetery can be located: a new burial site, or an extension to an existing cemetery, cannot be located less than 250m from any well, borehole or spring used to supply water for human consumption or food production (e.g. at dairy farms), less than 30m from any spring or watercourse not used human consumption or food production, less than 10m from any field drain including dry ditches, or within a groundwater Source Protection Zone (SPZ) 1 [9].

But the link between burial sites and groundwater isn’t exactly a new issue – historical accounts from the mid-1800s after cholera and influenza epidemics killed tens of thousands of people reported that the water within wells, which at the time were often sunk next to graveyard walls, “had become so offensive to both smell and taste that it could not be used” [10]. More than half of all the cemeteries in the UK were constructed between 1851 and 1914 [11] before the above legislation was in place – a search of historical land uses data held by Groundsure revealed 521 graveyards located within an SPZ 1 and 1,006 within 250m of a drinking water abstraction point.

There are few modern studies on the topic, particularly within the United Kingdom, so it’s hard to assess the real-world impact of cemeteries on groundwater. One such study was undertaken at a cemetery in the West Midlands, located on the second-most important drinking water aquifer in England, with graves dug to two metres below ground level and the groundwater levels generally five metres below the surface. The results of the study showed that groundwater down hydraulic gradient from the cemetery had slightly elevated concentrations of chloride and sulphate, as well as “highly contaminated” levels of pathogenic bacteria [12].

Another problem is that cemetery plots are becoming increasingly crowded. Despite cremation having been the more popular option for the better half of a century, there are still a significant number of people choosing to be buried: in 2018, over 200,000 burials occurred in the UK [13]. In London, several boroughs no longer have no operational cemeteries due to lack of space, including the City of London, Tower Hamlets, Westminster, Hackney and Islington [14]. One option is to “reclaim” graves which have been dug deep enough to allow room for another corpse on top, or to reuse them, whereby remains in an existing grave are placed deeper to make space for the new cadaver [15]. The latter option is currently legal only in London, and graves for re-use must be over 75 years old [16].

So with restrictions in place for new cemetery sites and a rising amount of burials all demanding space, what other options do we have? One to consider is the “green” burial, which is becoming more popular since the first natural burial site opened in Carlisle around 20 years ago. There are now more than 300 natural burial sites in the UK [17], typically situated within woodland, fields or meadows, removing the need for fertilisers and landscaping. The traditional embalming process and coffin are done away with in favour of eco-friendly biodegradable materials such as cardboard and linen [18]. These conditions mean that the corpse (and its housing) can break down and decay more rapidly, and the products of decomposition will return to the soil as they naturally would. And where trees are planted, these will absorb water and seepage, reducing the quantity of leachate that could otherwise reach groundwater [19]. In the current climate emergency, it seems only fitting that we all do our part to minimise our environmental impact both in life and beyond the grave.

Groundsure offer a wide range of reports which contain groundwater and historical land use data from authoritative sources. Please browse our product selection for more information.

[1] Neckel, A., 2017. Environmental damage and public health threat caused by cemeteries: a proposal of ideal cemeteries for the growing urban sprawl, Brazilian Journal of Urban Management, 9(2), 216-230.

[16] 2016. City of London cemetery will never run out of space. Available at: https://news.cityoflondon.gov.uk/city-of-london-cemetery-will-never-run-out-of-space/ [Accessed 15th October 2019]