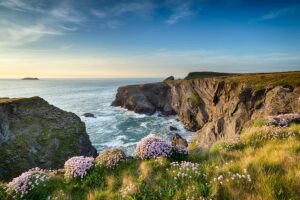 What are the dangers of coastal erosion?

As an island nation, we are rightly proud of our coastline. Our majestic cliffs, estuaries, sand and shingle beaches are a fundamental part of our landscape and our national identity.

It is all the more distressing then, when we realise that this cherished identity is being rubbed away by rapidly accelerating climate change and threat of coastal erosion.

One of the biggest drivers is sea level rise, in turn as a result of arctic glacial ice melt. According to Met Office data, the global average sea level has risen by at least 20 centimeters from 1901-2018 while Arctic ice is thought to be 65% thinner than it was in 1975.

The ice caps act as a reflector of the sun’s energy, but as they shrink less of that energy is reflected and more absorbed by the planet’s surface, accelerating warming further. Indeed, the Arctic is the fastest warming location on the planet. At the same time, permafrost is melting, releasing vast quantities of methane and carbon dioxide into the region, which in turn warms the climate and accelerates the melt. We seem to be locked into a permanent loop.

On one astonishing day in July last year, a glacier on Greenland melted enough to raise global sea levels by an average of a millimetre and enough to drown the entire US state of Florida in 5cm of water, according to the Danish Government monitoring service.

At the current rate, sea levels could rise by as much as a metre by 2100, impacting many major world cities and large tracts of low lying areas well inland from current coastlines. The melting also releases more freshwater into the oceans. Changes in seawater salinity can affect currents which in turn can affect the climate as well as marine organisms and ecosystems.

Just this month, the Thames Barrier was raised for the 202nd time in its history in response to a storm system coming down the North Sea combined with a spring tide. In a recent report, the Environment Agency recorded that the water level in the Thames has risen by 1.4mm per year on average between 1911 and 2018, but by 3.6mm per year between 1990 and 2018.

Today, 97.5% of the tidal flood defences in the estuary are classified as meeting or exceeding their target condition and very recently, Emma Howard Boyd, the EA Chair, stated that many vulnerable communities on our eroding coastlines would need to be relocated and whole settlements given up as cliffs collapse and saltwater renders productive land infertile.

A Journey around our Coastline Geology

Given this backdrop, it is important to understand how sea level rise will impact our coastline and the communities that live along it. The picture is variable, driven by geological history and the rock type it affects. After the last ice age, the slow release of pressure from glacial melt 10,000 years ago is lifting Scotland, while the south and east are sinking. We also have to factor the rock type – it’s a complex picture, so for simplicity, we have divided the country into ‘hard rocks’ and ‘soft rocks’.

Softer rocks, like sandstones, mudstones and chalk are more commonly found all the way up the East coast, from Broadstairs in Kent to Filey in North Yorkshire. Here, the coastline is eroding at a constant rate and being exposed to the turbulent North Sea. Cliffs are eroding in a conveyor belt fashion. As the base of the cliffs erode through wave action, this steepens the cliff profile and reduces stability, eventually leading to coastal erosion, cliff failure and landslides.

Nowhere is this more prevalent than at Happisburgh in Norfolk. Here the coastline is eroding at an alarming rate of 8-10 metres per annum (Poulton et al., 2006) in some places and is predicted to lose around 97 metres of coastal land in the next two decades, according to the EA, if no action is taken. A variety of coastal defenses have been implemented over the years but with a rise in sea level and an increase in stormy weather these have been made redundant, allowing continuation of coastal erosion.

Robin Hood’s Bay in North Yorkshire has an interesting geomorphology of sedimentary rocks ranging from Shales, to mudstones and sandstones. Differential weathering rates have resulted in ridges and troughs known as scaurs. Since 1780 it is thought that the area has lost more than 200 properties to coastal erosion and that the cliff has receded by up to 22 metres. Coastal defences have been employed in the area but are now showing signs of disrepair, according to the North York Moors National Park Authority.

The south coast geology is more complex. Not only do the sandstones become more solid but we also see the appearance of more clays, chalks and limestones. This changes the nature of how the cliffs erode. Instead of cliff falls, where the top of the cliff topples into the sea, cliff ‘slumps’ occur, where the bottom section slips out from under itself causing the rest of the cliff above it to collapse.

A perfect example of this is the Undercliff on the Isle of Wight. The largest urban landslide complex in northern Europe, the Undercliff is 5 miles long and consists of chalks and sands with significant clay layers in between. When it rains, water percolates through the porous chalk but is resisted by the impermeable clay layers. The water build up in the chalk makes the cliff section top heavy and coupled with marine erosion at the toe of the cliff, causes cliff instability and eventual collapse through rotational cliff slumping.

This ancient landslip has been active since antiquity but it hasn’t stopped settlements and infrastructure being built within the landslide complex itself. The main road through the Undercliff, suffered coastal erosion and eventual collapse back in 2014 after severe storms and cliff movement. The road was closed and has yet to be reopened.

Indeed, the severe winter storms of early 2014 emphasize how weather events can also trigger cliff or sea defence collapse. The rail line at Dawlish was washed away, cutting off mailing services to Cornwall for eight weeks, while a build up of groundwater and structural weaknesses in the cliffs on the Jurassic Coast at West Bay in Dorset are examples of how sea level and extreme weather magnify coastal erosion in prone areas.

Aside from the regional complexity of the geology, other man-made factors can affect cliff stability. Mining in Cornwall often took place in coastal areas. Rich deposits of Tin, Copper and other valuable metals were mined from both coasts, sometimes in areas with softer rock deposits.

The weathering profiles of the Cornish coastline vary substantially. The Land’s End’s granite intrusion is largely stable due to the structure of the rock whereas sedimentary bedrocks like mudstone and sandstone along the north coast around St Agnes weathers at a much greater rate and is therefore more susceptible to landslides. Also, mineralised areas of the rock are located along faults which are more prone to collapse.

The raised beach or marine terrace at Cot Valley was formed by a period of much higher sea levels during the last interglacial period. It had been moderately stable for many years with only minor rock falls, however following Storms Dennis and Ciara, a large section of the cliff collapsed burying the pathway to the headland. This was due to higher spring tides undermining the cliff deposits eventually leading to the collapse.

In recent years a collapse of the cliff along the coast from the village of Praa Sands has consumed part of the southwest coast path. The area of cliff fall lies above a channel in the rocks below. It is expected that further sections of the path will succumb in the next few years.

Future coastal erosion and climate change scenarios for your client

The future for our coastal landscape and the communities that live along them will be determined ultimately by how cost effective it is to protect them. The EA have already signalled that the time has come to think the unthinkable and retreat inland in the worst affected areas.

Even assuming that government spending on coastal defences is maintained in perpetuity, we still see the likelihood of around 750 properties being lost to the sea in the short term (the next 20 years), a further 2,000 properties in the medium term (20-50 years), and an additional 5,700 in the long term (50 years+). If investment isn’t maintained through lack of available funds or political will, then these figures could rise to over 80,000 properties disappearing in the long term.

Groundsure Avista reports include the latest National Coastal Erosion Risk Mapping (NCERM) from the Environment Agency and National Resources Wales to show exactly which areas will be at risk in both the scenario where local coastal defences are funded and maintained and additionally if defences were not present, or unfunded and abandoned (a scenario known as No Active Intervention). This ensures your client gets the clearest view of likely future coastal erosion and climate change impacts on their property to be able to make confident decisions.

Follow us on Twitter to keep up to date with all our new blogs, case studies and events related to coastal erosion and climate change.