Transactions up 12% in February. 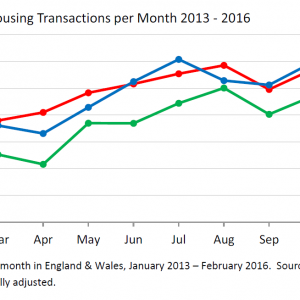 The number of house transactions increased 12% month to month from January to February – twice the growth from December to January according to Your Move and Reeds Rains.

According to Peter Williams and John Tindale of Acadata, the number of transactions in England and Wales for February will total around 64,000, 9.3% higher than in February 2015. The typical increase from January to February is around 2.9%

The report states: “We estimate that the number of housing transactions in England & Wales for the month of February 2016, as recorded by the Land Registry, will total some 64,000. This total is 6,750 transactions higher than in January, an increase of 11.8%, compared to a typical increase of 2.9%, being the seasonal effect for the time of year. The level of sales is also 9.3% higher than the same month in 2015.

“Both of these statistics indicate that the market in February 2016 is busier than usual, which is almost certainly due to an upswing in sales ahead of the introduction of the 3% surcharge in stamp duty on second homes and buy-to-let properties to be introduced on April 1st. We anticipate that sales in March will be similarly above expectations for the time of year to beat this tax deadline, and will then probably level off reflecting sales brought forward.”

Average prices also rose, up 0.8% month to month, putting Your Move and Reeds Rains estimate for an average property in England and Wales at £289,229.

Richard Sexton, director of e.surv chartered surveyors, said: “House prices flew forwards in February, with the average home value in England and Wales increasing 0.8% (£2,277) during the month, equal to an average increase of £79 each day. This is double the 0.4% monthly growth seen in January, which could be as a result of buy to let investors rushing to complete quickly to avoid April’s additional 3% Stamp Duty surcharge, which has also seen sales shoot up 11.8% since January. February’s house price growth is fantastic news for homeowners, particularly those considering cashing in on the additional demand and making the most of this sellers’ market. Typical property values are now £16,866 (6.2%) higher year-on-year; the fastest annual growth rate seen in eleven months, driven by the gulf in the number of aspiring home buyers, compared to the limited supply of homes for sale.

“The East of England is outranking the capital with the fastest growing property prices of all regions, with a 7.2% uplift in the last twelve months. This pace is being fuelled by commuter towns, as London’s workers search for more affordable housing. The trend towards higher house price growth in cheaper areas can also be seen elsewhere. While house prices in Yorkshire and Humberside have remained flat on a monthly basis, property values in the City of Kingston upon Hull have hit a new record of £111,409, up 0.9% compared to the previous month, as the city has one of the lowest average home values in the country. The upswing in Hull’s home values is due to the increase in new jobs resulting in more demand, with major firms including Samsung lifting employment in the city. Recently winning City of Culture 2017 may have provided an additional boost to demand for property within the city, as the pickup in tourism supports the local economy as a result of the award.

“In London, house prices have climbed 6.8% year-on-year, to reach £582,783. This rapid escalation means that the typical home in the capital is now worth £36,903 more than twelve months ago, exceeding the Londoner’s median gross annual earnings of £35,333. Most of this jump in house prices again occurred in more affordable areas, with property values in the cheapest third of London boroughs going up 14.5% in the last twelve months. Despite the upswing in the capital’s overall property values, sales have slipped 4.6% in the three months November 2015 – January 2016, compared to the same three months one year earlier. This is largely due to a lack of homes for sale combined with more caution at the top of the market, rather than a general decline in demand.

“In fact due to the impending stamp duty hike, home sales have surged in February across England and Wales as a whole, with total home sales up 9.3% compared to the same month last year. The biggest boost in property purchases of any region has been in Poole, with a 21% upswing in sales. Luxury flats with views over Poole Harbour and Sandbanks have seen the biggest growth, as wealthy buyers seek to avoid the additional stamp duty surcharge which will apply to second-homes, as well as buy-to-lets. Property prices have also risen as a result, up 11.6% over the year, as affluent buyers place a premium on luxury homes by the sea.”