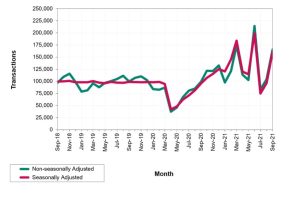 September property transaction figures showed the anticipated spike in volume as the SDLT holiday came to close, but did not reach the peaks seen earlier in the year in March and June according to HMRC figures.

The figures show the highest number of transactions registered in September since record began in 2005 with non-seasonally adjusted estimates of 165,720 home moves across the UK, with 145,640 in England as the final tapering came to an end of 30th September; 69% higher than September 2020 and 68% higher than last month.

The impact of the SDLT incentive is laid bare by sheer volume of transactions completed year to date in the 2021-2022 financial year, which is the highest in the previous 10 years by some way; some 23% higher that the previous high in 2015-2016 YTD. It represents the highest second quarter of transaction volumes and highest ever quarter since 2007.

Annual volumes have hit over 1.5m for the first time since 2008 according to analysis by Lawrence Bowles, senior research analyst at Savills fuelled by “record-low mortgage rates, desire for more space, and a core of unmet pent up demand.”

Attention now turns to the short and medium term future of transaction volumes. While demand remains high, the latest Property Trends Report from Landmark Information Group has indicated that new property listings continue to fall month on month indicating that conveyancing volumes may start to slow in Q1 2022.

And according to reallymoving’s latest house price forecast Conveyancing quote volumes continue to decline steadily, falling 4% between August and September, further indicating that buyer demand is settling back down to more normal levels.

“there’s no sign of that demand dropping off. But results from the latest RICS survey suggest supply shortages, which does suggest that we will see transactions soften in the final three months of the year.”

“These latest figures reflect the ambition of homeowners to get property transactions over the line whilst the stamp duty financial incentive still stood. Compared to the start of the year, the property market has begun to level out but remains incredibly active. Demand is still very strong and we expect it to fuel activity in the housing market well into Autumn and beyond.

“We have seen first-time buyers, moves by families and those looking to move into properties outside of cities carrying the weight of the market and taking benefit of savings due to the stamp duty holiday.

“Throughout the year, many lawyers have embraced digital ways of working in order to deliver efficiencies to the transaction processes and avoid burnout. Given the foreseeable levels of high demand, a long-term and sector-wide shift towards digitisation is needed if we are to accommodate speedier transactions and improve services to buyers in the long run. “

Calling for a review of SDLT given the changes in house pricing dynamic Nathan Emerson, Propertymark’s CEO, says

“With demand in the sector so high, these figures reiterate the need to review the outdated levels at which people start paying stamp duty, reflecting the growth of average house prices, especially given the fact the basic, pre-Covid rates have not changed since 2014.”