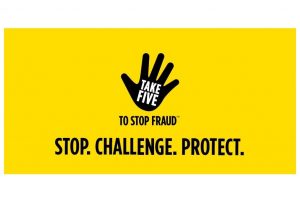 A campaign urging people to remain vigilant to impersonation fraud has got underway this week. The “Take Five to Stop Fraud” campaign urges people to Stop, Challenge, Protect when asked for their information or money.

The campaign comes as new figures from UK finance show the number of impersonation scam cases more than doubled in the first half of 2021 to 33,115. These scams resulted in criminals stealing £129.4 million through this type of fraud alone over this time. In the same period last year there were 14,947 impersonation scam cases which led to £57.9 million being stolen.

The rise in impersonation scams comes as research for the campaign finds that nearly one in five (19 per cent) of people feel uncomfortable saying ‘no’ to a request for personal information from a stranger via email or text, rising to almost a quarter (23 per cent) when it comes to phone calls. This could leave them at risk of an impersonation scam.

Overall, 92 per cent of people admit to saying ‘yes’ because they don’t want to appear rude. The research found that people use all sorts of phrases to avoid saying ‘no’, with the most popular being ‘I’m not sure’ (used by 37%), followed by ‘I don’t think so’, ‘Let me think about it’, and ‘I can’t at the moment’ (all 34%) and this can give criminals a way in.

Although primarily a campaign to raise public awareness, Take Five week is relevant to lawyers, particularly conveyancers, who have seen impersonation and online fraud increase over the last couple of years. Take Five is backed by the Council of Licensed Conveyancers who encourage firms to promote the initiative to clients.

“Criminals are experts at pretending to be someone they are not – and can fool even the savviest of people, who don’t want to seem rude.”

“If someone contacts you unprompted and asks for personal or financial information, stop and take a moment to think – even if they claim to be from an organisation you trust. Only criminals will put pressure on you to act quickly. Remember it’s ok to say no and contact the organisation through a route you know to be genuine.”

“The banking and finance industry works to tackle fraud on every front, through investing millions in advanced technology and working closely with the government and law enforcement to stop the criminal gangs responsible.”

To help people stay safe, the Take Five to Stop Fraud campaign advice is to:

The impersonation scams data are the first published figures from UK Finance’s half-yearly fraud report, which will be published later this month.