Strong pipeline predicted for conveyancers into the Autumn 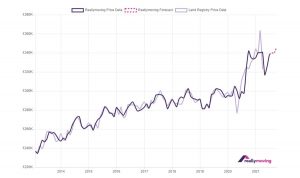 Conveyancing quote volumes peaked in Spring at more than double the usual level but dropped by 18% in June and a further 21% in July to reach more normal levels according to figures produced by reallymoving.

But the figures indicate that the property market will remain resilient throughout the Autumn according to CEO Rob Houghton.

Reallymoving captures the purchase price buyers have agreed to pay when they search for conveyancing quotes through the comparison site, typically 12 weeks before they complete, enabling them to provide a three- month house price forecast that historically has closely tracked the Land Registry’s Price Paid data, published retrospectively

Houghton points to a projected increase in average prices in October as evidence that demand is not now being driven by the SDLT holiday, which finishes at the end of September.

“with buyer demand arising from new working arrangements, a reassessment of housing needs and low mortgage rates likely to be a much larger driver of continued activity. Low new supply of homes coming onto the market is also putting upwards pressure on prices.

Following an exceptionally busy spring market which saw values rise strongly month on month, the prices agreed between buyers and sellers fell marginally in June which will be reflected in Land Registry data this September (-0.1%). This is likely to be little more than the froth coming off the market as the Stamp Duty holiday deadline approached, with buyers agreeing to pay less as they factored in the tax cost.

“This latest data allows us to see further into the autumn and once again the housing market is proving itself to be pretty resilient.

“Our inaugural Property Market Intelligence Report which launched this month showing that house price inflation is much lower for First Time Buyers at 2.5% than upsizers at 10%. Home movers with more equity are in the best position to move to their dream home now they are less tied to the office and the daily commute.”

“Yet First Time Buyers shouldn’t despair at the sight of climbing prices. They are increasing far more slowly at the lower end of the market and I’d urge anyone wondering if they can afford to buy their first home to look at the specific data for their area and their buyer group, which may be more favourable than they think.”