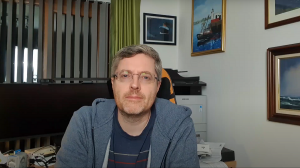 A Northern Ireland solicitor has captured the mood of the conveyancing industry in a short video posted on LinkedIn.

Recorded at 11.30pm on Friday evening, Philip Armstrong, of Greater Belfast-based Armstrong Solicitors discusses the challenges conveyancers are currently experiencing, with the current boom in home movers hamstrung by the Covid-affected infrastructure trying to serve it.

The video, which has over 4000 views and 120+ comments, has captured the mood of the industry as fellow professionals have posted supportive messages.

Philip, whose residential property team is one of largest in Northern Ireland, talks about the impact that remote working and reduced capacity is causing across the sector, citing the example of one of his legal assistants waiting 2 hours on the phone to speak with HSBC about a mortgage advance.

“How many people tried to contact this assistant during this period, irate by the fact that they were unavailable; and how many believed that they were on the phone for that whole period!?”

Reduced capacity is biting at a critical time for the sector as homemovers hope to take advantage of the SDLT holiday before the end of March.

Following on from Philip’s experience, a HSBC UK spokesperson, said:

“The last 7 months have been a very challenging time for all of us working to help people onto or up the housing ladder, and we genuinely understand and sympathise with Mr. Armstrong’s frustrations, including concerns about his staff’s mental wellbeing, as we also have significant numbers of colleagues affected in different ways by the current situation. At the same time, the mortgage market is very buoyant and HSBC UK continues to see high demand for its products. We are aware that this has caused some service pressures, particularly on our Help Desk for solicitors, but we are confident that we have measures in place to meet that demand and are also sending confirmation of release of funds by email on Certificates of Title where the solicitor submits this with the required notice.”

Many of the challenges are out of the control of conveyancers; councils and regional property certificate units working from home and not working productively, lenders not sending out title deeds because of a lack of resource; which all ultimately lands on the conveyancer’s desk.

Alongside the practical challenges, Philip talks about the effect on the wellbeing of his staff.

“As a business owner, I am embarrassed to see how tired they (the staff) are and how stressed they are.”

He goes on to describe how staff have had to deal with being verbally abused on phone calls, receiving abuse on social media and incurring the wrath of online reviewers who have posted 1* reviews on Google, some of whom are not even connected to the transaction.

And the potential knock on effect is clear:

“It is abundantly clear we are sitting on a PI timebomb because of how busy we are now. When you are under pressure you make bad decisions and we will force conveyances through that under normal circumstances wouldn’t be forced through, ultimately leading to more PI claims and increased premiums.”

Philip talks about the level of expectations being set, particularly by estate agents, and while he is at pains to point out that not all estate agents are guilty, the ones that are make the job so much more difficult.

Responding to the overwhelming support from the industry Philip says:

“I post a weekly video on LinkedIn to demonstrate some element of our daily work and/or the challenges (and occasional wins) that we experience. It is never my intention to garner support or sympathy, but rather simply to comment observe. I must say that I have been humbled by the myriad comments of support from across the country whilst also being struck by how widespread and desperate the situation is – not just in Northern Ireland, but across all the UK. I think it’s fundamentally important, especially for conveyancers working on their own, to see that we are not actually alone, and that our colleagues across the industry share the same pressures and won’t seek to increase our pain.

“There is little doubt though, that our conveyancing profession will not be able to improve the situation acting alone ; we need a joint education process backed by the legal profession, estate agency industry, UK Finance and the respective Government department in each jurisdiction which will provide some sort of guidance about what buyers and sellers can reasonably expect, and crucially, to whom they should look to shape those expectations.”