Did we see you at last week’s LFS? 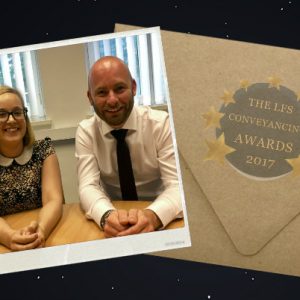 The Today’s Conveyancer team were thrilled to have attended the much-anticipated Law Firm Services Conference and Awards last week, with the annual event failing to disappoint.

Off to an early start, the event begun by exploring the range of engaging stands on offer, as well as interacting with a number of delegates to discuss the day ahead.

Heading into the main conference room, attendees were then comfortably seated to hear Richard Mathias deliver a brief overview before introducing the first speaker to the stage.

Discussing the potential impact of artificial intelligence on the industry, TM Group highlighted that whilst the housing market was stifled by uncertainty, the introduction of technology to the conveyancing sector could bring countless benefits.

Next onto the stage was well known BBC economist Justin Urquhart Stewart, who led an entertaining talk on the impact of Brexit on the housing market. Despite being interspersed with amusing anecdotes and topical references, the talk highlighted the serious uncertainty in most markets at present and just what the long-term impact of departing the European Union will be.

Following the talks, delegates were led out to the individual breakout sessions, hosted by Lawyer Checker, Infotrack and Conscious Solutions. These focused on a range of topical issues within the industry at present, highlighting the risk that firms face as well as how technology was shaping the profession and the transaction process in particular.

Importantly, they also provided professionals with the important opportunity to share their concerns and engage with other conveyancers, as well as regulators, on issues that they were facing.

Following the afternoon networking session, attendees were invited to the Lender Panel Debate, where they were able to pose questions to a panel of lenders including Santander, Lloyds and Nationwide. Over the course of the debate, the delegates highlighted a range of issue that they were facing, most notably relating to the lack of symmetry where case management systems were concerned, as well as receipt of COTs and the relevance of the Conveyancing Quality Standard.

After a lively discussion with engagement from both the panel as well as delegates, Richard Mathias delivered a brief closing statement, thanking those who had contributed to the day, as well as everyone who had attended.

Commenting on the success of the day and congratulating those who had their achievements recognised at the awards was Chris Harris. The Managing Director of Lawyer Checker stated: “All at Lawyer Checker were proud to be a sponsor of this quality event. In the day the LFS conference gave me and all the other delegates a great opportunity to keep abreast of all the changes in the market in particular relating to fraud.  The award nominees and winner showcased how hard and dedicated the best conveyancers are and how keen they are to deliver excellent service.  Well done to all the winners.”

Also reflecting on the highlights of the day was Today’s Conveyancer’s own Heather Cameron. As well as drawing attention to the insight gained, Heather also commented on her engagement with delegates throughout the day, having interviewed them for a series soon to appear on TC.

“I found this year’s Conference incredibly well attended. The Lawyer Checker breakout room in particular was bursting at the seams! Having been running for a couple of years now, I think attendees have now realised the valuable insight they can gain from the breakout room sessions.

These have certainly been a great addition and allow attendees to pick a specific topic that they will find interesting and useful for their own work.

“It was lovely to meet so many people while I was there also. We managed to capture some great interview footage for our Today’s Talk series from a range of conveyancing professionals.”