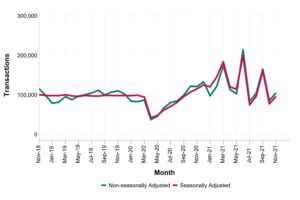 After a significant decrease was observed for residential transactions completed in October 2021 due to the ending of the temporarily increased nil rate band for SDLT in September, the 22.7% increase recorded for November indicates a return to stability in line with previous seasonally adjusted trends.

But although buyer demand remains strong, with Propertymark reporting an increase of 12% in November, the volume of property stock available for sale has reduced by a third in the last year. Based on the same levels of inflows and outflows experienced in the last three months, some experts now predict that all areas of the UK, except London, will cease to have an effective property market in the next twelve months.

“We appear to be caught in a negative downward spiral; I will not put my house up for sale as I cannot see any houses listed that I would be interested in buying. Logic would dictate that at some point the rise in prices would bring more stock to market, but the cost of change of property is high, and whilst affordability is as good as it is ever likely to be in terms of debt servicing costs this is not enough to change the current dynamics.”

“After the dip in October it is good to see that non-seasonally adjusted transactions recovered in November, against some expectations.  Appetite has never been in question, there are plenty of people still looking to move or remortgage, and that is only likely to continue now that the Bank of England has made its first base rate increase.

It will be interesting next month to see if the news of the increase made any difference to current appetite, or whether it gave people even greater impetus to tie themselves into a better deal before a second increase.”