Predictions That Buyers Will Look For Green Suburban Areas 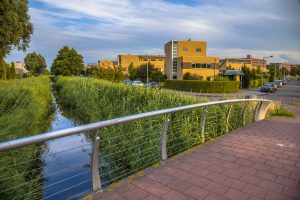 Latest Research by the Royal Institute of Chartered Surveyors (RICS) has shown that surveyors are predicting that buyers are changing their preferences in the properties they are looking for, and that there is evidence the property market sentiment is improving.

The Residential Market Survey taken out in May by RICS found that new buyer enquiries has increased from the record lows of -94% to -5%.

Away from the headline net balance of new buyers, the newly agreed sales indicator moved from -93% to -35% and new instructions from -97% to -20%. Despite all indicators still being in the negative, the improvement in the market is a positive step towards recovery of the market.

The survey in April had shown low expectations in the market, however the month of May saw an increase to 1 in 10 respondents feeling positive that predicted sales would increase over the next 12 months rather than decrease.

The headline price indicator was not as promising however, with a downward movement from -22% to -32% over the last month, the lowest monthly reading since 2010.

“Today’s RICS Residential Market Survey results point to a slight improvement in the outlook for sales over the coming 12 months. It’s also reassuring to see that new buyer enquiries moved from -94% in April, to -5% in May which showcases a more stable demand – this is good news for the UK property market.

“However, we must not forget the impact that the current pandemic has had on both buyers and sellers. Today, people are a lot more cautious with their finances due to a decrease in home income caused by loss of work and other factors. Buyers would have once paid the asking price for their desired property, but now they’re going to be more inclined to submit a much lower offer. This is something sellers must be aware of, because buyers will start to ask if they’ll accept a lower offer on their property and may be inclined to look elsewhere if they say no.

“Moreover, consumer desires have also changed. Now, we’re seeing an increase in buyers wanting more space from a property, both indoors and out. Location will also be key, for example, people will want to be close to green spaces where they can go to walk, exercise or meet with friends and family.

“It’ll be interesting to see how the property market adapts to these changes over the coming months.”

It was also predicted that 78% of respondents felt there would be a fall in the number of people looking for tower block housing and 58% predicting that properties in highly urban areas will be less enticing.

“Following the reopening of the housing market in England, pre-Covid sales that were in the pipeline are now largely going through.

“This is encouraging but it remains to be seen how sustained this improvement will prove.

“Much will inevitably depend on the macro environment and, in particular, the resilience of the jobs market as the furlough scheme unwinds.

“For the time being respondents to the survey see the trend in transactions being broadly flat.

“Alongside this, there are already signs that those looking to buy a house are responding to the conditions created by the pandemic by seeking out properties with gardens or balconies and nearer green space.

“These and other similar features are likely to increasingly command a premium over higher density urban locations according to respondents to the survey.”