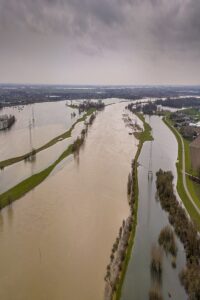 A new report published by the think-tank Localis reveals that almost 200 planning permissions have been granted on floodplain land in 2021 so far, for more than 5000 new homes in high-risk local authorities across the UK.

Over 16,000 planning applications were analysed between January and September, with researchers finding that planning permissions had been granted in local authority areas where more than 10% of homes were at significant risk of flooding. The most affected regions are in Yorkshire and the Humber and the East Midlands, where half of  proposed housing will be situated on a major development on a floodplain in north Lincolnshire. But experts warn that worsening climate change and mounting pressure on local authorities to build thousands of new homes is putting homeowners at added risk from flooding.

While the Environment Agency offers advice on areas thought to be at greatest risk from flooding, local councils decide whether or not to allow building to go ahead in these areas.

David Renard, the housing and environment spokesman for the Local Government Association, commented:

“In the last five years, almost 99 per cent of homes included in planning applications were decided in line with Environment Agency flood-risk advice. Where building does take place on an area where there is a risk, councils need to be reassured that adequate defences are in place.”

Renard also said that councils are required to reject any applications that are thought to be “reckless and irresponsible“.

The Localis report also recommends that policy and regulatory changes should be made to make developers liable for the sustainability and insurability of new developments built in floodplain areas, and suggests that there should be an increased collaboration between the public and private sectors to rejuvenate and future-proof flood insurance schemes and partnerships.

Speaking about the development of flood risk assessment products for the mortgage and financial sectors, FloodSmart Analytics led by Phillip Martin, at GeoSmart Information, said that increasing extreme weather events due to the climate emergency has highlighted a significant disparity between the long-term nature of property lending, which is typically 25 years for a domestic mortgage, and the short-term nature of risk transfer through insurance, which is typically taken one year at a time.

“Historical experience can no longer provide an adequate data set for using quantitative statistical models, which are currently heavily relied on. Using inferior data will lead to sub-optimal decisions by insurers, mortgage lenders and risk analysts, so it makes sense to use the best available data,” he said.

“There is a clear need to reset government policy and regulation to prevent an otherwise unavoidable 50 per cent uptick in the numbers of houses being built on floodplains over the next half century. At the same time, with climate change another unavoidable reality, we need to strengthen communities to become resilient in adapting to, living with and responding to flood pressures.”

“Whilst we welcome the government’s commitment to increase housing we have concerns about the UK’s resilience to future flood events, and in particular the number of new housing developments in flood risk areas that are still receiving approval. With those involved in the planning process ignoring the current guidance, this runs the risk of putting an ever-increasing number of communities at risk.”

“To tackle this, we need to come together and develop a holistic approach to flooding for the long term, with property developers, insurers and government – both nationally and locally – tackling the issue of building on floodplains“, he added.

A government spokesman commented that floodplain development, “should be avoided wherever possible, and protections must be put in place when building in these areas is necessary. We expect local planning authorities to follow this guidance“.