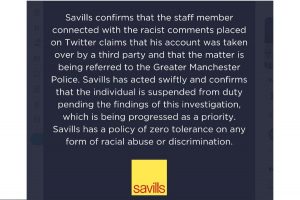 An employee of estate agency Savills is alleged to have tweeted a racial slur in response to the penalty shootout heartbreak England suffered on Sunday evening in the European Championships Final.

On Monday morning images appeared over social media of the tweet from the commercial building manager employed by Savills in Manchester. The storm swirled throughout yesterday as the image was widely shared and very publicly identified the individual at the centre of the allegations.

Through a series of tweets, Savills confirmed it was investigating and reaffirmed their zero tolerance stance toward racial abuse and discrimination.

Later in the day a statement from Savills indicated that that account might have been hacked and that the matter had been referred to Greater Manchester Police.

“Savills confirms that the staff member connected with the racist comment placed on Twitter claims that his account was taken over by a third party and that the matter is being referred to the Greater Manchester Police. Savills has acted quickly and confirms that the individual is suspended from duty pending the findings of this investigation, which is being progressed as a priority. Savills has a policy of zero tolerance on any form of racial abuse or discrimination.”

“GMP has received complaints about a social media post following the Italy v England Euro 2020 final at Wembley yesterday. Reports from across the UK are being collated by United Kingdom Football Policing Unit and The Metropolitan Police and will then be allocated to the relevant forces for further investigation if required.”

A number of England players were the subject of abuse following Sunday’s defeat. Boris Johnson, confirming the easing of Covid restrictions from 19th July, condemned their abusers saying

“To those who have been directing racist abuse at some of the players, I say shame on you and I hope you will crawl back under the rock from which you emerged”

“If you abuse anyone on social media you’re not an England fan and we don’t want you.”

Twitter and other social media companies are also coming under greater pressure to sanction accounts that broadcast discriminatory content. It is still possible to set up a Twitter account without the need to provide any personal verification, enabling the user to tweet anonymously. Yesterday Twitter said it had removed more than 1,000 posts which violated its policy and permanently suspended a number of accounts since Sunday.

“Racism is utterly unacceptable in any circumstances. Property agents deal with members of the public and as such have a duty to treat all parties with equal respect… we never want to see an incident like this occur and such behaviour doesn’t have a place in modern society. We trust Savills to take appropriate action.”