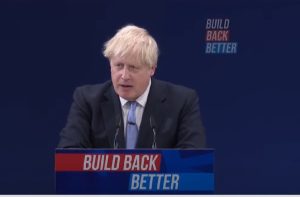 “There is no happiness like taking a set of keys, and knowing that the place is yours and you can paint the front door any colour you like. As it happens I am not allowed to paint my own front door, it has to be black”

Mr Johnson outlined his plans to boost home ownership for young people, “solve the national productivity puzzle” and fix the housing market by improving the infrastructure behind our working lives, including connectivity, public transport and the cost of living.

Mr Johnson described how the government was embarking on a £640bn programme to “Build back Better” with plans to increase the number of new homes built. He outlined how planning would put “beautiful homes on brownfield sites in places where homes make sense” and announced the intention to re-wild parts of the country with “tens of millions of trees.”

There had been hints that housing would sit as a tenet of the levelling up agenda with the appointment of Michael Gove into the newly renamed Department of Levelling Up, Housing and Communities, previously the Ministry of Housing, Communities and Local Government.

Elsewhere the speech praised the response of the NHS to the COVID-19 pandemic, with reference to the fastest vaccine rollout in Europe. Mr Johnson also said he would crack down on crime and seek to increase wages for all.

The end of the conference brought sad news as it was announced on Friday that former housing secretary James Brokenshire, had sadly lost his battle against lung cancer. Mr Brokenshire, who was 53, held the post under Theresa May’s government from April 2018 and July 2019 and was replaced by the recently ousted Robert Jenrick.

“Desperately sad to hear the news about James Brokenshire. James was the nicest, kindest and most unassuming of politicians but also extraordinarily effective. He served with particular distinction in the Home Office and as Security Minister. If the government needed something done well and speedily – and sensibly explained – James was the man to do it.”

“I worked with him for many years in London and I know how much he cared for the interests of his Bexley constituents. His fight against cancer was heroic, and it is a measure of his resolve that he came back from a first bout with the disease to serve in government again. He will be missed by all who knew him.

“Our thoughts are with Cathy and his family.”

“On behalf of the Civil Service, I would like to express my deep sadness at the news of James Brokenshire’s death.

“He was a man of deep kindness and integrity, and as a Minister he inspired respect and loyalty from the civil servants who worked for him in the Home Office, Northern Ireland Office and the then Ministry for Housing and Local Government. I had the personal privilege of working with him closely over a number of years and admired greatly his unwavering commitment to public service and compassion.

“The thoughts and condolences of colleagues right across the Civil Service are with James’s family and friends.”