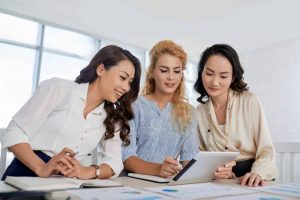 Yesterday marked International Women’s Day which celebrates and highlights women’s achievements throughout history and how far we have come in gender equality since the Sex Disqualification Act was passed in 1919.

Even though gender equality has advanced since the Act there is still a clear gap between women in law and women in senior leadership roles.

Promoting diversity in the legal profession has been a difficult task over many decades and despite many campaigns to address the issue, still more needs to be done.

“Our law firm diversity tool shows that entry into the profession is diverse but women, black, Asian and minority ethnic (BAME) and disabled lawyers continue to be under-represented at partner level, particularly in large firms.”

Fast forward another year to 2019/20 Risk Outlook the profession is still singing from the same hymn sheet as the Outlook states that ‘more needs to be done to improve the representation of all groups especially in senior roles.”

The Outlook reveals that even though a third of all partners are women in small firms, in firms with five or more branches, the figure reduces to below 30%. And although black, Asian and minority ethnic (BAME) practitioners across all firms make up 20%, BAME only make up 8% of the workforce in large firms.

Meanwhile, those women working in the financial services sector make for an interesting read when looking at gender equality. The Financial Conduct Authority found that only 17 per cent of FCA-accredited financiers were women but the percentage of senior roles carried out by women had risen from 9 per cent in 2005 to 18 per cent in 2019.

It is clear that more and more women are filling senior leadership positions than they were decades ago – as PWC revealed in their Real Estate Balance Members Survey that the proportion of women sitting on the boards of property firms had increased from 19 per cent in 2017 to 22 per cent in 2019.

2017 was also a massively important year for female practitioners as the 2017 Women in Leadership in Law annual statistics report revealed there were more women than men practising as solicitors, and since 1990 women have represented over 60 per cent of new entrants into the law profession.

“2019 is the centenary of the Sex Disqualification (Removal) Act, which allowed women to train as solicitors, serve as magistrates and sit on juries.

“The profession has made great strides over the past hundred years but there is still a long journey to gender equality, particularly at senior levels in certain regions of England and Wales.

“We hope our new Women in Leadership in Law report will assist legal businesses with the insight and tools to drive diversity – right up to the most senior levels – and create equal opportunities for all.

“More than half of the respondents we interviewed in our survey on women in the law cited perceived unconscious bias as the greatest barrier to women’s career progression with an overwhelming 91% saying flexible working is critical to improving diversity.

“As a profession which endeavours to uphold justice, the legal profession needs to lead the way in the fight for equality in the workplace.

“To create a more diverse senior leadership, diversity and gender equality must be placed at the heart of business decisions. The profession needs to come together to combat unconscious bias, encourage flexible working and meet both men and women’s working needs.”

Here at Today’s Conveyancer we wanted to encourage and facilitate relationships and foster collaboration between women in senior roles across the residential property industry by setting up Women in Residential Property (WIRP) events across the country.

Founded in 2017 and chaired by Emma Vigus, managing director of mio, and facilitated by Solve Legal Marketing, WIRP brings the women working in all sectors of residential property together to improve networking opportunities for female professionals who may find traditional industry events intimidating and overtly competitive.

WIRP are hosting a further five lunches this year with the last successful event in January 2020 – the next event takes place on Thursday 26th March in Birmingham.

The events are all about collaboration, focusing on organising networking events which provide a relaxed environment in which to develop friendships and share knowledge.

As the Founder of WIRP, Emma Vigus, explains why she chose to set up a network exclusively for women, she said:

“Whilst I’m very conscious of the equality agenda, WIRP is not about overtly driving it. I don’t believe that women are better than men or vice versa but I do believe that men and women have unique skills and character traits which, when combined and properly managed, create a more effective ‘whole.’ I also believe that women are more open to collaboration and there are several studies that suggest that women are more likely to care for the collective which is crucial to effective collaboration. It can also mean that women are often better team players and that, in turn, makes us increasingly likely to support people to get things done. That is vital to effective networking which is about supporting people and receiving support, in return.”

So, this International Women’s Day let’s join forces and build and develop lasting friendships and share expertise and knowledge on personal challenges and issues within the sectors.