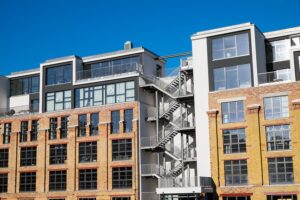 The Royal Institution of Chartered Surveyors (RICS) says it will not remove EWS1 requirements for low-rise buildings.

Previous guidance issued by the Government earlier this year stated that having consulted with lenders, low-rise buildings less than 18 metres in height would no longer be subject to EWS1 forms.

Former housing secretary, Robert Jenrick said in July, that an independent panel of experts had found that small and medium blocks of flats less than 18 metres high posed “no systemic risk” with an expert report indicating that “it is now clear that there has been an overreaction and excessive risk aversion in some parts of the market”.

But RICS have now announced that it will not be removing requirements for EWS1 checks from its current guidance in order to protect potential buyers.

Commenting that RICS has a responsibility to safeguard the public interest, Dame Janet Paraskeva, chair of the board at RICS, said guidance needed to remain in place, “so that purchasers do not risk finding themselves trapped in flats of any height because potentially crippling costs are ignored and passed unwittingly on to them, which so many current owners have discovered too late”.

“RICS must not let this critical issue be swept under the carpet because the correct inspections have not taken place ” Paraskeva added.

RICS, along with cladding campaign groups, have asked the Government to be bold when it comes to setting a new way forward to tackle the crisis.

The End Our Cladding Scandal campaign group, commented that there was insufficient evidence that low-rise buildings were safe:

“Valuers, lenders and insurers cannot ignore this risk, homeowners in these buildings cannot escape this risk, and the government must stop hiding from the true scale of this crisis”, it added.