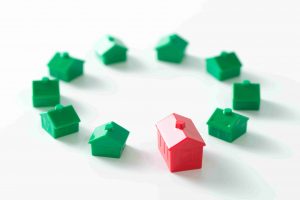 The number of empty homes in the UK have increased by 5.3% in the past year, tipping the scales at more than 160,000 long-term empty dwellings.

According to the research by Action on Empty Homes and the Nationwide Building Society, 10,983 additional homes were left empty for longer than six months in the past year.

The research also suggests that the problem is escalating at a faster rate than in the past with the current 5.3% increase doubling the 2.6% rise in empty homes documented a year previous.

The recent increase in additional vacant dwellings also reverses a long-term trend, spanning back to 2008, of empty residential dwellings declining.

The results mean that the overall total of empty UK homes makes up 72% of the Government’s annual target to build 300,000 new homes per year.

The report highlighted the importance of bringing these empty dwellings back into residential use, especially when more than 1 million families are currently on extensive waiting lists for social housing.

“Concerted action and funding are needed from Government and the housing sector to identify and tackle the growing issue of empty homes.

“It’s a missed opportunity that there are 200,000 empty properties that could house people desperately needing a home of their own.”

Will McMahon, Director of Action on Empty Homes, said:

“With homeless numbers at their highest levels in over a decade, it makes no sense to leave hundreds of thousands of homes standing long-term empty.”

A Ministry of Housing, Communities and Local Government spokesman said:

“The Government has given billing councils in England the power to charge up to 100% extra council tax – on top of the standard bill – on properties that have been empty for at least two years, to help incentivise owners to bring them back into productive use.

“We are investing £1.2 billion to tackle all forms of homelessness and have made the most ambitious change to homelessness legislation in a decade – helping more people than ever before access vital support to prevent them from becoming homeless in the first place.”

What should be done to bring this residential windfall back into circulation?