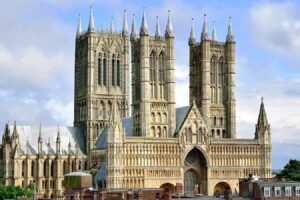 Lincoln and other areas in the Midlands and North have been dubbed hotspots for buyers looking to move out of bigger cities such as London, due to the introduction of flexible working by many employers across the country.

Working from home has become the new normal for many people in the UK due to Coronavirus restrictions. According to research, 44% of those aged between 30 and 49 advised that they are working from home as of June 2021.[1]

“Changes in employment contracts that allow more flexibility when it comes to working from home mean that it is becoming less important for people to live in close proximity to their office as they may only go in once or twice a week, or not at all.

“Due to this trend, there has been a sharp rise in people moving out of bigger cities such as London, Manchester and Birmingham – favouring areas where the average house price is lower and they can get more space for their money. By using a conveyancer local to the area could also results in lower fees than what you might expect to pay further south.

“Flexible working has many potential benefits as well as giving people more options when it comes to location – it can also be more sustainable and be better for employee wellbeing.”

Those moving are favouring more rural locations such as Lincolnshire – specifically Grantham, Bourne and its surrounding villages as well as areas in Nottinghamshire.

As well as having lower asking prices, these areas have natural beauty spots on their doorstep such as the Peak District, Lincolnshire Wolds AOBN, Rutland and the East Coast.

“With many people now working from home full-time or working flexibly between their homes and office, it makes sense that the locations in which people are looking to buy are changing.

“In 2021, 42% of the enquiries that we’ve received have been from people who do not currently live in the area, looking to move somewhere where houses are cheaper and have good transport links to bigger cities such as London.

“We’re finding that people are requesting to see properties that boast more outside space and open-plan living – something that they wouldn’t necessarily get for their budget were they looking in London or another big city.

“The quality and quantity of grammar and private schools we have in the region, particularly across Grantham, Bourne and Sleaford, are also proving to be attractive to prospective homebuyers. Many of the schools in these areas offer scholarships and cheaper fees than their southern counterparts.

“People are realising that these affordable areas are closer and more accessible than they thought. It’s only an hour commute from Grantham to London, making it the perfect option for those who work in the capital a few days per week or per month.”

What has previously stopped people from looking at these areas as potential hotspots is the travel infrastructure; however, the recent budget announcement saw significant commitments in high-quality transport, called ‘levelling up’ funding that will better connect the more rural areas of the country – specifically in the Midlands and the North.

As a county, Lincolnshire will also benefit from a share of the Government’s Towns Fund – a £3.6 billion fund to help 45 towns across the country to recover from the pandemic and drive long-term economic growth and productivity. Areas that will benefit from the funding, include: Skegness, Mablethorpe, Boston, Lincoln, Scunthorpe and Grimsby.