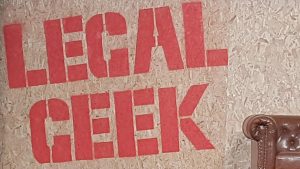 Based in the Truman Brewery building, in the heart of London, LegalGeek was poised and ready to open its third annual conference. Having grown exponentially throughout its short life, the quirky, industrial venue reflected the inventive and original startups that were housed within.

The cavernous tombs intertwined to reveal a vibrant, chaotic cacophony of enthusiastic sounds. As the maze of rooms filled up, an eclectic mix of LawTech startups exhibited and demonstrated their wares to the 2,000 strong army of technology embracing legal professionals.

Following Jimmy Vestbirk’s, Founder of Legal Geek, introduction to the event, he used the help of Siri to announce the morning’s speakers.

The Rt Hon Lord Richard Keen, Scottish lawyer and Conservative Party politician, highlighted LawTech’s potential to provide affordable justice for all by simplifying the processes and bringing down costs. His final conclusions that although technology has this capacity, the public may be concerned by the perception that machine learning and algorithms could be used to judge and sentence people in the future.

His plea to the LegalTech creators was a need to legitimise smart systems to avoid public objections. Technology must appeal to and reassure the public that its use will not result in an Orwellian dystopia.

Christina Blacklaws, President of The Law Society, discussed technology and its applications to the law. Whilst reminiscing about ‘Tomorrow’s World’ inventions, like robot snooker players, paper pants and bike boats failing to mainstream, she insisted that LawTech should. However, only if it benefits the consumer. Her following remarks regarding the importance of all stakeholders collaborating was also well received.

The Ministry of Justice’s Amanda Smith spoke on the importance of making technology accessible and understood by all. Insisting that data literacy will be vital in the future and technology should be more inclusive as a result.

Despite the torrent of rain, the afternoon sessions enlightened the LegalGeeks through a myriad of startups demonstrating how their products could improve efficiency, enhance business agility and improve firm security.

Jimmy Vestbirk, Founder of LegalGeek, took the time out of his day to inform Today’s readers: “The day is going well, so far!

“It’s important to bring together the innovators of the legal profession because we bring together people that can be siloed in their law firms. These are the opportunities to re energise, go back to their practices with a mindset of trying to bring about the changes that are needed.

“The technology underpins it. People talk about AI, but actually, this is about a cultural change and technology being adopted, to bring about positive change, whether that is in conveyancing or other areas of law.”

It took Amanda Goodman, writer of Robots in Law, to remind us of Mike Tyson’s words of wisdom that ‘everyone has a plan, until you are punched in the face;’ insisting that innovation is difficult to plan for as you don’t know if it will catch on.

Based on the atmosphere throughout the day, it is clear that many firms are willing to take that punch in the face by making the proverbial leap of faith into a legal profession adopting technology for the benefit of all stakeholders.