Legal Service Robots Are On The Rise 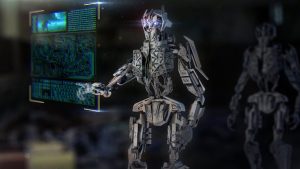 The rise of the robots has plagued the imagination of science-fiction since its inception. Whether it involved Asimov’s three rules of robotics or the time travelling robotic psychopaths in the Terminator franchise, the world has worried about the role of robotics.

The world has prepared itself for the robotic invasion with many low skilled jobs in retail, customer services and industrial industries like factories all replacing humans with robotic counterparts to some extent; many of which improve efficiency, productivity and costs.

Shockingly, San Francisco-based company, Atrium, believe that robots have the potential to supersede and complete the job of some high-paid legal service workers.

As young as 14 months, Atrium, along with the $65 million investments from adventure capitalists, are set to revolutionise the legal sector by using artificial intelligence to work alongside legal service professionals, and in some cases, replace them.

The law firm specialises in corporate law that will use AI technology to do much of the legal work. The software uses machine learning code to help it decipher many legal documents, creating an automated and repeatable process.

The use of machines creates many benefits for both the company and its consumers. Firstly, customers will face significantly reduced fees as the legal service professional, that would once have completed the documentation, can now be filled out by the free work of robots.

Additionally, the company is able to reinvest and utilise their human talent in more difficult cases, thus maximising efficiency and productivity.

Justin Kan, one of the 110 firm founders, said: “It is tedious work and often subject to human error – this isn’t a skill they teach in law school. But from a programmer’s perspective, these are documents with similar structure, over and over. So, we built a model that takes in these convertible securities, then make a schema for the data expected in these docs.”

AI can be used to automate and support in routine tasks. We have seen that online signatures are becoming more popular in the conveyancing world and a way to reduce the monotony of form filling, however essential and important, should be a welcome relief. However, the skilled legal services practitioner should rest assured that, in spite of the support and help robots can offer, they remain our faithful and obedient workers lacking the relevant expertise to usurp other legal service roles.

Can you see a way for conveyancers to embrace AI technology in this way? Would this reduce time wasted completing forms? Can you see this technology as a way that could speed up the conveyancing process?