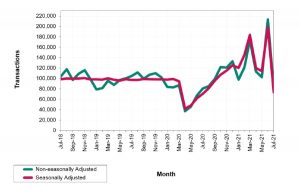 Transaction figures released today (24th August) by HMRC show a 61% decrease in home moving activity in July compared to June following the end of the first stage of the SDLT holiday tapering process.

Despite the drop in transaction numbers, industry figures continue to be optimistic about market conditions with indications that transaction levels will remain steady following the end of the final phase of the SDLT holiday tapering at the end of September.

“This month’s slight rebalance of the market is welcome news and a much-needed step in the right direction, with supply of property beginning to increase and the number of homes selling for over the asking price starting to even out. Now that the stamp duty holiday is close to it’s final phased out end, we expect this trend to continue in the coming months as people and spending habits return to normality post Covid.”

“It was to be expected that housing transactions would be lower in July but 62% is quite a drop. Having said that, June was a record month as the conveyancing industry worked hard to get as many house sales over the line before the first phase of the stamp duty holiday ended. This saw record months for most firms in the conveyancing sector.

“We are still seeing a good level of instructions in house sales and purchases as people are still eager to beat the final stamp duty holiday exemption on 30 September. Positive news is that we are also seeing a strong return to the remortgage market despite it being the holiday period, which we expect will continue over the coming months.”

“After the mad rush to beat the Stamp Duty Land Tax holiday deadline at the end of June, there was always going to be a drop off in activity over the summer months and we’ve seen that play out in today’s figures with transactions down by almost two thirds in the space of one month. However, while this may provide a welcome opportunity for the conveyancing sector to draw breath, we expect this to be relatively short-lived.

“The phasing out of tax incentives might bring transaction numbers down from their record highs for a short period, but the market will continue to be fuelled by buyers who need to adapt to lasting societal changes in the post-pandemic world.  It is therefore likely transaction numbers will rise again in the autumn when people are back from holiday and have had a few months to assess what their working and living arrangements might look like long term.

“Facing the prospect of high levels of market activity later this year and into next, it has never been more important that the property sector continue to push the pace of change and technological innovation. The adaptability of firms throughout the pandemic has enabled the market to keep going despite some of the most challenging conditions we’ve ever seen. Of course, many will be enjoying a well-earned rest over the summer, but it is vital that business leaders harness the positive momentum we have seen over the last 12 months and continue to look at how new processes and technologies, like AI, and increased digitisation of data can drive future efficiencies.”

Following news over the weekend from influential think tank the Resolution Foundation that the SDLT holiday impact may have been overstated, with other factors playing an equal, if not more important, role, Sarah Coles, personal finance analyst, Hargreaves Lansdown adds:

“Property sales tumbled almost two thirds in July, after the stamp duty holiday deadline passed. It demonstrates the powerful psychological impact the tax break had, which went way beyond the actual cash buyers could save.”

“The stamp duty holiday didn’t create demand from nowhere. There was already a crowd of people ready to buy because of changes in how we wanted to live, and pent-up demand from the closure of the market during the first lockdown. The tax break just opened a window of eight months, through which this crowd of people tried to squeeze… it meant a bulge in property sales, and the fact there were fewer sellers than buyers at a time of such massive demand, pushed prices through the roof.