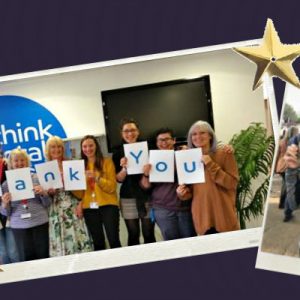 How long had you wanted to run the marathon Jill?

‘Running the London Marathon has always been a dream of mine – I’d applied for the last six years in the public ballot but never got through. As usual, in 2016, I put my name in the ballot in May and then heard in October that I hadn’t won a place. Our CEO, Ben Thompson, is a charity ambassador for Rethink Mental Health, so I asked if I could run for Rethink Mental Illness. ‘Leave it with me,’ he said. I was lucky – the email hit Rethink’s inbox just at the time the fundraising team there heard they’d been granted an extra marathon place. Serendipity – I was over the moon.’

‘I started in earnest in December, warning my partner Andrew that he was about to become a marathon training widower!

The ideal training is a 16-week programme. I was already running half marathons – 13 miles. But people say that halfway to a marathon isn’t 13 miles – it’s actually 19 as that’s when the going gets really tough. So I ran through the winter three times a week, building up my miles and fitness and staying injury free.

I did the Reading Half Marathon in March. That was great but the following week I made the classic mistake of running too many miles on top of it – and I tore a muscle in my calf. I saw my sports physio and he advised repair through training rather than rest so that meant swimming, cycling and strength exercises at the gym. Three weeks later he told me the muscle might niggle on the day, but I’d be absolutely fine to run.’

And you had great support from ULS?

‘Yes, my colleagues have been amazing, rallying round to support me every step of the way. We started fundraising in our office with a Christmas buffet and then we had the idea of doing soup days. A couple of my colleagues and I made three big vats of soup – carrot and coriander, mushroom and tomato and red pepper – for several Mondays and charged £2.50 for a bowl with a roll. Everybody thought it was great fun to have home-made soup in the office so that went down really well. We did an Easter raffle where colleagues donated prizes – we ended up with 40 in all and sold tickets for a pound each. All of that fundraising was great because not only did it raise money for Rethink, it really brought everyone together and as they all got behind me it made me feel so supported as well.

I’ve had lots of support from our solicitor firms and from search companies too – I’ve been lucky. My initial fundraising target was £2000 but I quickly realised I’d exceed that.’

When the big day arrived how did it all go?

’Three days before I went down with a bad cold. I couldn’t believe it. On the Sunday morning, I woke up feeling rotten but I had a massive bowl of porridge and took some Paracetamol – then I jumped on the train to the start line at Greenwich.  When I arrived, the buzz picked me up and I knew I could do it. I was lifted just by being part of this incredible event and the amazing atmosphere. Then I was being herded across the start line – and I was off.

I ticked off the first 22 miles easily enough, spurred on by an encouraging hug from my daughter Amy and keeping my energy up with Lucozade gels handed out at stations along the way. Running through London, past all the iconic sites, was incredible and I choked up a bit as I ran across Tower Bridge.

But, with four miles to go, my legs started to cramp – and I had to walk the last stretch. I saw Andrew on the Embankment, with a mile to go, and he gave me a hug and cheered: ‘You can do it.’  Approaching the finish on The Mall, even as one of the walking wounded, was an amazing experience.

When I got over the line I was excited and relieved – I’d done it. It felt slightly surreal – a medal was placed around my neck, photographs taken and it was over.

How did you recover?

‘When the adrenaline wore off, my cold made me groggy but I was back at work after a rest day.  I was a bit stiff – walking upstairs was fine but I had to walk sideways downstairs. By the Wednesday I was healthy again – in fact, I was ready to go for a run!’

What was your time?

And would you do it again?

‘Straight after finishing with that cramp in my legs I did say ‘no way’. But, by the evening, I was thinking: ‘Maybe.’ And now I’ve applied to be in the ballot for 2018. So yes, I want to do it again – hopefully fully fit next time.’

’Yes. My fundraising page is still open for people to donate for the next month if they would like to. I’m very pleased that I am Rethink’s top fund raiser from the marathon.’