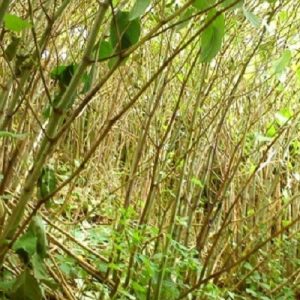 A challenge by Network Rail in relation to a private nuisance claim over Japanese Knotweed has been dismissed by the Court of Appeal.

The case dates back to 2015, where a claim was issued against the rail company by Stephen Williams and Robin Waistell, the owners of adjoining semi-detached bungalows.

The pair argued that the presence of the weed on Network Rail’s land encroached on their properties, and in turn, interfered with their quiet enjoyment of, and caused a loss of amenity in respect of their properties. This is because it reduced the market value of the property.

The judgment handed down last year found that the rail company’s breach of duty had caused both damage and a continuing nuisance.

Whilst Network Rail had sought to challenge this ruling in the Court of Appeal, the original judgment, published earlier this week, was upheld.

However, it is worth noting that the Court based this decision on different reasons than those of the recorder from last year.

In fact, master of the rolls Sir Terence Etherton claimed that the recorder had been wrong in principle. This was in regard to the former conclusion that the presence of the plant on Network Rail’s land within seven metres of the properties was an actionable nuisance, ‘simply because it diminished the market value’ due to lender caution.

Drawing on the purpose of the tort of nuisance, Etherton stated that it ‘is not to protect the value of the property’; this is neither in the sense of it being a financial asset or investment.

He also disputed the original rejection by the recorder of the nuisance claim founded on the spread of knotweed rhizomes.

A network of roots which the plant develops underground, rhizomes enable Japanese Knotweed to regenerate with very small fragments, increasing its ability to spread quickly.

Etherton said that the rhizomes of the plant can be described as ‘natural hazard’ and can ‘affect the owner’s ability to fully use and enjoy the land.’

He went on to say that they are a ‘classic example of an interference with the amenity value of the land.’

Representing Stephen Williams on the case was JMP Solicitors. Speaking in relation to the Law Society’s TA6 property information form, the firm warns conveyancers: ‘If you answer untruthfully “no” or “don’t know”, your buyer can come back to you and either rescind the contract or get damages from you as the property is now worth a lot less than they thought.’

A Network Rail spokesperson said: ‘As many gardeners know, Japanese knotweed is invasive and requires several years of treatment to remove. Once identified, Japanese knotweed growing on our land is entered into a treatment programme. We will continue with this established regime, which complies with legislation and helps us run a safe, reliable railway. Network Rail is aware of today’s ruling by the Court of Appeal and is considering its implications.’

Nic Seal, Founder and MD Of Environet, the Japanese Knotweed removal firm said: “Network Rail fought the original case in Cardiff Crown Court thinking they could win and stem the tide of claims against them. They’ve now scored two spectacular own goals and unwittingly opened the flood-gates for thousands of new claims.

“This judgment should put all owners of land infected with knotweed on notice to take proper action to ensure their knotweed does not encroach onto or threaten other property. Those that continue to ignore the effects of their inaction and affect their neighbour’s enjoyment of their property are now fore-warned. The law is clear and substantial damages can be awarded against them.

“It is also worth pointing out that a defence in nuisance is that all reasonable measures are being taken to mitigate the nuisance. A half-hearted or cheap attempt at control is unlikely to meet the ‘reasonable measures’ test.

“This judgment will have far-reaching implications for owners of land affected by Japanese knotweed. It provides the legal profession with great clarity, which is likely to increase the number of merited claims and settlement of those not worth contesting. This can only be good news for those we would describe as ‘victims of encroachment’ who up to now have had to put up with bully-boy tactics, inaction and worry while their home is blighted by this invasive and damaging weed.”