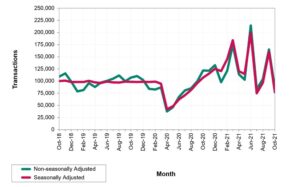 The latest figures released by HMRC appears to show a cooling of the housing market in England and Wales.

Transaction figures for October 2021 show provisional non-seasonally adjusted estimate of 85,090 home moves, 30% lower than October 2020 and just under half of the September 2021 volumes.

September figures were expected to be artificially higher as home movers sought to take advantage of the final month of the SDLT holiday, which ended on 30th September. October’s appear to be indicative of the challenges many estate agents and representative bodies have been saying about the decrease in the volume of new properties coming to market.

NAEA Propertymark report the number of properties currently listed per estate agency branch as 23, a year on year low for the month of September and a significant decrease from September 2020 ’s figure of 41.

Buyer demand remains strong, with the average property price hitting record levels in September at £270,000, an increase of £28,000 in the last 12 months.

Earlier this month Rightmove reported a slight drop in asking prices on the portal as homemovers seek to encourage buyers before Christmas.

“The number of housing transactions has practically halved in October compared to September, which is a direct result of the end of the stamp duty holiday.

“This is back to levels seen before the pandemic started and could be described as a return to normality after the frenzy that the stamp duty holiday unleashed on the housing market.

“However, the conveyancing part of the industry remains extremely busy and firms are still working through the largest pipelines we have ever seen. This is likely to remain the case until the end of the year, and with the supply of housing stock dropping we hope to return to more manageable business volumes.”