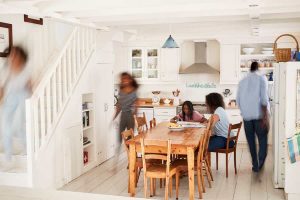 A housing crisis is causing major stress and disruption in family life, according to an Affordable Housing Commission survey.

The commission’s findings reveal that housing stress, due to a shortage of homes, is potentially stopping nearly 2 million people from having children and attributing to mental health problems.

The national YouGov poll, which took place at the beginning of February this year, and was undertaken for the Affordable Housing Commission, surveyed over 2,000 British adults. The key objectives of the survey were to examine the causes and effects of the affordability crisis and discover solutions.

The results of the poll found that housing affordability is affecting millions of people and dictating major decisions at different stages of people’s lives, from moving out of home and living independently to starting a family.

The key findings were:

The research also reveals that housing stress is a major worry for people and a strain on their mental health. One in eight (13%) of those polled say their mental health has been negatively affected by their housing situation, rising to one in four (25%) for those living in unaffordable housing, where rent or mortgage equates to more than a third of their total household income.

With the housing crisis having such a damaging impact on families, the stress and disruption to family life could lead to negative emotions and ill feeling amongst spouses which could potentially result in relationship breakdowns and divorce.

“The housing system is hindering, not helping, millions of people – particularly those who are putting off big life decisions because of it. Unaffordable housing, especially in the private rented sector, is now a serious strain on people’s mental health and a barrier to having a better life. We need a fundamental rethink and structural change to rebalance it and ensure it works now and for future generations.”

“This research demonstrates that problems with the housing market are affecting the population in increasingly insidious ways: disrupting family life, mental health and fundamental life choices.

“Young people are increasingly forced into expensive and often low quality private rentals because of the shortage of social housing and increasingly unaffordable house prices. With private landlords able to evict tenants with little notice, this is an unstable situation for anyone to live in and especially those thinking about starting a family.

“Increased investment into social housing at the upcoming budget offers a massive opportunity for the government to remove the barriers identified in this report, level up the country and ultimately help resolve the housing crisis.”

The Commission’s recommendations will be published in March 2020.