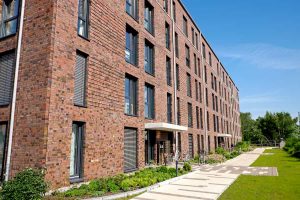 The Government have been urged to make commonhold ownership compulsory on all new-build flats.

The Leasehold Solutions Group claim the current leasehold system is damaging to leasehold property owners and their suggested changes will ‘eradicate leasehold ownership within 50 years.’

Onerous leasehold conditions and onerous ground rents have dominated the property sector in recent years, prompting the government to make significant reforms on new build properties and the Law Commission to consult and produce a summative paper on commonhold property.

The ‘Reinvigorating Commonhold: the alternative to leasehold ownership‘, is due out in the next few months and should set out a framework for how commonhold ownership could work for UK properties.

The commonhold system is already commonly used in Europe with many units in shared spaces enjoying freehold ownership status without a time limit on ownership.

The lack of government intervention concerning existing leasehold obligations, reduced control of shared spaces and perceived unfair ground rent costs associated with leasehold ownership has prompted many to look at the benefits of an alternative ownership structure.

“Freeholders and developers won’t choose to build flats as commonhold out of some sense of moral duty or social obligation. Freeholders currently make billions from the leasehold system, whereas if flats were built as commonhold there would be no ground rents due, no fees for licences and permissions, no finders fees for building insurance, no admin fees to pay and no fees for lease extensions; in short, no pay day for fat cat freeholders.

“Developers and freeholders are the architects of the onerous leases that allow them to make vast profits and blight the lives of millions of leaseholders. Commonhold would reduce freeholders’ capacity to profit from the exploitation of leaseholders, therefore unless commonhold is made compulsory it will never become a workable replacement for leasehold.

“Building new flats as commonhold and strengthening leaseholders’ rights to convert their existing leases to commonhold ownership would sound the death knell for the leasehold system. Over time the housing market will come to favour commonhold ownership structures and by 2066 market forces would consign leasehold to the history books; exactly 1,000 years after this feudal, exploitative system was originally conceived of by William the Conqueror.

“We call on the Government and the Law Commission to be bold enough not just to reform the leasehold system, but to put legislation in place to eradicate leasehold and replace it with a just, fair and transparent commonhold system.”

Would commonhold ownership strengthen the rights of the unit owner? What legislative changes would benefit those living in flats?