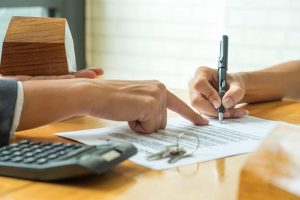 The Government is keen to introduce a system of having legally binding agreements to reduce the number of transactions collapsing every year.

This month the Ministry of Housing, Communities and Local Government initiated the second stage of research into reservation agreements.

Back in the summer, the Government confirmed they would be completing a thorough 10-month research and trial into reservation agreements to see whether it would secure the home buying and selling process.

Currently, an offer can be withdrawn until contracts are exchanged which puts a transaction at high risk of falling through. This issue is common and happens to a third of all sales in England and Wales every year.

Introducing a legally binding agreement after acceptance of an offer could end the risk of a transaction collapsing and put an end to gazumping and gazundering.

Experts in the industry discuss whether reservation agreements are needed to reduce fall-throughs and if unforeseen mitigating circumstances make it difficult to enforce the agreement on buyers/sellers.

“It is an interesting question, are Reservation Agreements needed to reduce fall-throughs? In the absence of any other solutions, the answer must be yes. However, more information up front, i.e. a seller’s pack might well do the job more easily, effectively and efficiently.

“As a result of the Government’s Call for Evidence on How to Improve the Home Buying and Selling Process, a number of initiatives are being developed, including the provision of more information upfront and a possible trial of a ‘standard’ form of Reservation Agreement.

“The sales director of the London estate agency has recently said that for sales of some properties the company follows the example of developers and require a reservation agreement as standard. Chris Osmond said:

“’ The benefits of Reservation Agreements are lower fall-through rates. Our vendors also like it as it ensures a committed buyer who has skin in the game.’

“A Reservation Agreement might mean more commitment earlier on, but would it mean a quicker, less stressful transaction? Without also adding more information up-front, it is doubtful.

“As far unforeseen mitigating circumstances are concerned, the devil will be in the detail. However, a good, well-drafted Reservation Agreement should cover most eventualities.

“I think that by the end of 2020 we will all have a much clearer idea of exactly what changes will have a positive effect on improving the home moving process.”

John Jones, Head of Conveyancing at BBH Legal Services Limited comments on the use of reservation agreements. He said:

“Even if you agree with the principle of ‘lock-in agreements’ or ‘reservation agreements’, it is not clear how adding that further layer to a conveyancing transaction will assist with the Government’s stated ambition that the conveyancing process needs to be ‘cheaper, faster & less stressful’.

“Sellers and Buyers will need advice on the implications and risks of entering into such a ‘reservation agreement’. This will require conveyancers being involved in the process much sooner but is likely to add to the costs for clients.

“Plus, even if the reservation agreement is prescribed by Government, there will continue to be occasions when Sellers and Buyers change their mind resulting, no doubt, in disputes around the agreement.

“Disputes arise now following formal exchange of contracts albeit in a small number of transactions. Also, what does the Government mean by a ‘binding reservation agreement’? How will it be enforced?  It will be interesting to see the final version of this agreement and the guidance (or perhaps legislation?) that sits with it.

“I agree that Sellers and Buyers need reassuring that once an offer is accepted that the transaction will proceed to completion. I’m not sure that a reservation agreement, by itself, will give that reassurance. Accepting that a third of sales ‘fall-through’ before exchange, it must be noted that not all of those failures will be the result of gazumping or gazundering but unless some form of imposition is placed on Sellers and Buyers to behave reasonably with each other, then such behaviour will remain a problem.”

“Fall throughs are costly, frustrating and prevent people getting on with their lives. We therefore support the move to try and reduce fall throughs and increase both buyers’ and sellers’ confidence in the process by introducing a binding reservation agreement.  We’d hope that by providing this extra level of assurance people will be more inclined to enter the property market in London. With demand currently outstripping supply in the capital – Chestertons data suggests that in September the number of new properties coming to the marked dropped by 20% compared with the year before, while applicant registrations were up 18% in the same period – anything that could encourage potential sellers to the market should be welcomed.

“Property transactions fall through far too frequently and this is due to a wide range of factors, including changes in personal or financial circumstances, changes of heart and disagreements over specific terms of the deal.  We hope the government takes steps to ensure that people who do have to pull out of a deal for reasons beyond their control are not penalised, although what constitutes a ‘good’ fall-through and a ‘bad’ one will no doubt be subject to a lot of debate.

“Gazumping and gazundering are actually relatively rare, apart from in especially busy markets and periods of rapid value increases.