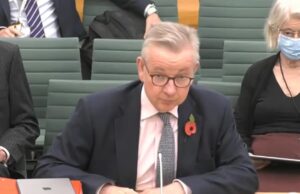 Leaseholders of flats below 18m who do not fall under the current government support schemes have been given a boost by Housing Secretary Michael Gove.

Mr Gove appeared before the Housing, Communities and Local Government Committee to answer questions on the government’s response to the tens of thousands of pounds leaseholders are having to pay for remediation.

Much of the funding made available is aimed at flats above 18m with leaseholders below that limit forced to pay tens of thousands of pounds for remediation, funding for which is available via a loans scheme.

“We have a responsibility to relieve some of the obligations faced by leaseholders at the moment, who are innocent parties in this and who are being in many cases asked to pay disproportionate sums when there are individuals in business – some still in business – who are guilty men and women,”

“I’m still unhappy with the principle of leaseholders having to pay at all, no matter how effective a scheme might be in capping their costs or not hitting them too hard at any one time. My question is why do they have to pay at all?”

Mr Gove said he would pause the current loans scheme and bring forward proposals to replace it in the coming weeks.

The government has committed in excess of £3.5bn to cladding remediation. In February previous Housing Minster Robert Jenrick committed £3.5bn  while the recent budget saw Rishi Sunak confirm the details of the Residential Property Developers Tax; a tax levied on property developers with profits over £35m at a rate of 4%, which could yield an estimated £205m in additional funding.

“It would seem to me that at the very least developers have to ask whether or not they were engaging in ‘value engineering’, in other words seeking to reduce costs in a way which not just with the benefit of hindsight but at the time people would have known was putting cost reduction ahead of safety.”

Mr Gove leads the recently beefed up Department for Levelling Up, Housing and Communities. On his appointment, Mr Gove was told to “fix” the cladding scandal by Prime Minster Boris Johnson.