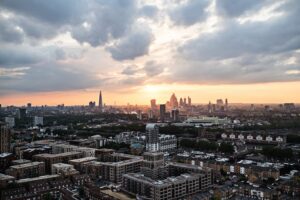 Thanks to planning rules passed by Ministers in 2020, freeholders are now selling off “building plots in the sky” as more developers take advantage of rooftop extension development rights which allow up to two storeys to be built on commercial and residential blocks without full planning permission.

Since the introduction of the new rules in August 2020, so-called “air-space deals” have increased by up to 60% according to some experts. It is thought that by banning the collection of ground rents on new builds, this has caused developers to seek other avenues to maximize profits. Speaking to the Times, Daniel Minsky, a property consultant at Estate Office in north London commented, “the bill has made new ground rents worthless. This is an opportunity for freeholders to maximise their assets”.

Initially introduced to help ease the housing crisis, the relaxing of planning regulations means that an additional 41,000 new homes could be built on rooftops in the capital alone, according to research by Knight Frank and Fruition Properties. Although estimates from the government’s impact assessment by the Leasehold Knowledge Partnership charity are more conservative, suggesting the new rules will build 8,120 new homes over the next ten years.

As a result, several new companies specialising in air-space real estate have come to market including Apex Airspace, Click Above, Fruition Properties and Upspace, which have also jointly launched the new Association of Rooftop and Airspace Development. The Association plans to introduce a code of conduct to ensure the sector acts professionally.

Many leaseholders have however expressed concerns that living underneath a potential upwards extension could mean a loss in property value, with some fearing that works could also compromise the structural integrity of their homes. Speaking to the Times, Simon Collins, a resident of Grange Court near Bristol, said, “we can’t even object on the grounds that the building might fall down”.