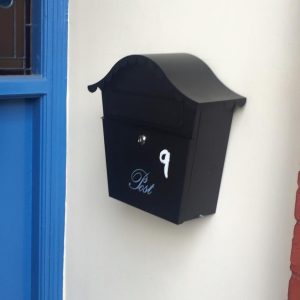 Criminals are intercepting mail by gluing extra letter boxes to the outside of houses.

According to concerned members of the public in Greater Manchester, criminals are harvesting bank details and other material whilst people are out.

One such resident Linda Dunn issued a warning on Facebook after she was targeted.

Linda says she opened up the box to find a letter addressed to her husband from TSB bank confirming that a £1,000 overdraft agreement, despite the couple never having banked with them.

Linda, reported the matter to the police before writing: “Look out for post boxes like this suddenly appearing in your porch, probably with your house number tippexed on – or a mess indicating where they have been stuck on.

“This is an attempt at identity fraud. The postman was fooled by ours and put letters in it including two from TSB bank giving online verification code and confirming £1,000 overdraft in my partner’s name.

“Postman was just leaving our street as my daughter returned home and found young man in porch who said he’d got the wrong street. We think he was there to retrieve letters or box or both.”

ActionFraud have issued a warning on the matter asking people to be vigilant.

The warning read: “Residents are sometimes unaware of the fake letterbox as the fraudsters will periodically remove the item, which may leave notable markings. The mail is then used to open various lines of credit with financial providers in the name of the innocent resident.

“Check for any suspicious activity, tampering of your post/letterbox or for suspicious glue markings on the wall.

“Check all post received from financial institutions, even if they appear unsolicited.

“Consider reporting theft of mail to your local police force and any cases of identity fraud to Action Fraud.

“If you have been a victim of identity fraud consider Cifas Protection Registration.

“If you, or anyone you know, has been affected by this fraud or any other scam, report it to Action Fraud by calling 0300 123 2040 or using the online reporting tool.”