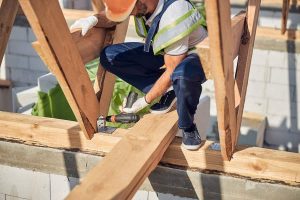 A third First Homes development site has been unveiled in Newton Aycliffe in the North of England. The announcement follows that of two First Homes sites in Bolsover, Derbyshire and Cannock, Staffordshire, where work began earlier this year.

The new flagship government housing scheme announced its third development in Newton Aycliffe, Durham, which aims to benefit families and key workers in the local area by providing a route to affordable housing. First Homes will support local people who are struggling to afford housing prices in their area but want to stay in the communities where they live and work by offering homes at a discount of at least 30% of the market value. The discount will continue to be passed on through future generations and is another initiative in the government’s plan to overcome the housing crisis and level-up opportunities across the UK.

“Enabling more people to own their home is central to the mission of this government, and First Homes will offer a realistic and affordable route into home ownership for even more people.”

“It’s fantastic to be in Newton Aycliffe to see the new First Homes become available to local people here in the North-East. By offering the chance to buy a home at a 30% discount, we are giving local people, families and key workers like NHS staff and forces veterans, a route into home ownership where they already live.”

Major high-street lenders Lloyds and Nationwide have followed suit, and are now offering high loan-to-value mortgages against First Homes to support the roll-out of the scheme. This follows on from the 95% mortgage guarantee scheme announced in the spring which helps first-time buyers secure a mortgage with just a 5% deposit.

The government also announced earlier this month, that home builders can now bid for a share of a £150m package to support roll-out of the scheme, encouraging new building firms and developers to the industry amid calls for more jobs to be created and a lack of available developers for the work.

“Further sites are set to launch across the country in the coming months. A further 1,500 will join the market through a government-funded pilot launched this year, with up to 60,000 First Homes projected to be built across England and Wales by 2029-30.”

“We are delighted to be working with our partners in government, Homes England and Durham County Council, to officially launch the First Homes scheme at our Elder Garden development.

Keepmoat Homes is one of the UK’s leading home-builders for first-time buyers so it is great to be part of this initiative which will help even more people realise their dream of owning their own home. This is a true example of how working in partnership helps to support local people and communities.”

“We are very pleased to have been involved in the First Homes pilot. This is a fantastic opportunity for first-time buyers and key workers across County Durham who aspire to own their own home.

Ensuring that our residents have access to affordable housing is a key priority for us. This pilot puts people and communities first, allowing residents to buy their dream home in their local area. Furthermore, as this discount will always be passed on, it is helping to meet the needs of future buyers in addition to those currently looking to get on the property ladder.”