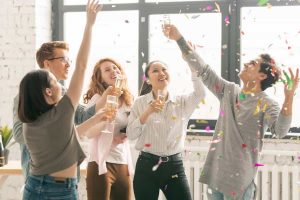 Nowadays, there are many routes you can take to learn and earn qualifications.

Historically, the legal sector has predominantly taken the route of university qualifications, it has taken a big leap in recent years, as it was announced at the start of this month, that an apprentice had qualified as a chartered legal executive.

Evie Elsbury, worked as a paralegal in the negligence team, at the Leeds based firm DWF. She now continues to work for the firm with her new qualification.

Although Evie did go to university, her first career choice was to become a history teacher, and she began down that path studying ancient and medieval history. However, once embarking on this journey she decided this path wasn’t for her. She wanted something else.

“Pursuing a career in law is highly competitive, where there can be potentially hundreds of applicants for one training contract. It can feel a bit dog-eat-dog out there when you’re starting out, but the apprenticeship seemed like a fantastic opportunity, and I grabbed it with both hands,” she said, adding that she had no student debts as a result of qualifying this way.

“I’m 25 and have already had six years in the industry. I’ve travelled within the UK and Ireland and put everything I’ve learned into practice. This definitely helped me retain what I’ve learned in my studies.”

However, the apprenticeship wasn’t an easy option, and it saw Evie juggling her studies and her work, attending night school to gain her Level 3 and Level 6 over four years. Following on from this, DWF offered a chartered legal executive apprenticeship through the Chartered Institute of Legal Executives (CILEx) Law School, which she undertook.

As part of the apprenticeship with CILEx, Evie was required to have three years of qualifying work experience, which she undertook after completing two years of study. After completing the course, she submitted her portfolio, and her qualification was confirmed in January.

Following years of study, Evie says she saw no need to go on and qualify as a solicitor, especially with the reputation of CILEx and its members on the rise in recent years.

“One of the partners at Triton was a chartered legal executive, so I’ve never seen it as a bar.

“I’m not treated any differently from newly qualified solicitors, and DWF has made it clear that they’ll back me as far as I can go.”

Do you think apprenticeships will grow in popularity on the legal sector?