Digitisation firmly on the agenda for government and lenders 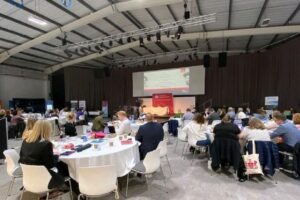 The Society of Licensed Conveyancers came together at their first in person conference in 2 years. With a packed schedule, the event brought over 200 conveyancers together at The Riverside Centre in Derby.

The day focused on addressing some of the practical challenges facing conveyancers, as well as providing an update on the work being done on buying and selling reform.

Speakers from HMLR, the Department of Levelling up, Housing and Communities, the CLC, estate agent body PropertyMark, RICS, The Residential Logbook Association, Nationwide, Lender Exchange and LMS, and the Conveyancing Association all provided an update on how they are working to improve and digitise the conveyancing process.

In a key theme for the day, Mike Harlow of HMLR addressed the work being done on digitising the Land Registry. Recognising the criticism around delays he told the audience that a significant amount of groundwork has been done to prepare the ground for future development “with as little impact on today as possible.” He suggested that the work done could see 80%+ of cases being automated in future; the first steps of which are coming into effect through the mandated used of the Digital Registration Service.

Mike also championed the work being done on the Digital ID standard which provides a “safe harbour” from recourse should conveyancers use an ID provider which meets the requirements of the scheme.

Department of Levelling up, Housing and Communities’ Matt Prior followed with an update on progress being made to provide greater certainty in the property process, including the trials of reservation agreements to reduce fall throughs, which has the potential to save £270m a year.

Alongside digitisation, creating greater certainty through the provision of up front information was a key theme of the day. Conveyancing Association Director of Delivery Beth Rudolf provided an update on Buying and Selling Property Information, BASPI, which provides greater certainty, transparency, and communication for all those involved in the property transaction.

The development of the concept of Property Logbooks provides further impetus to the efforts to provide more information up front for home buyers. Residential Logbook Association chief Nigel Walley described how collating the data created for and by our property is increasingly important, citing the move toward smart homes as an example of data that is often forgotten in the housing transaction.

For Walley, Logbooks are a long term digital asset to a property and although the information contained can be used as part of an front information product, Logbooks provide more than a snap shot in time the current system provides.

The discussion on up front information was followed by Mark Hayward of PropertyMark and Emma Cooke of the National Trading Standards Estate and Letting Agents Scheme who provided updates on the Regulation of Property Agents (RoPA) and the progress on current regulations around consumer protection respectively.

Deputy Chief Executive of the CLC Stephen Ward provided an update on their plans for the next 12 months including the recent approval to recharge more of the cost of the Legal Ombudsman (LeO) to the firms that generate a disproportionate level of complaints, citing significant rises in LeO costs over recent years.

And no discussion would have been complete without reference to the current recovery from the cyber security attack suffered by Simplify, a “sobering reminder of the risks that are out there” said Stephen Ward who recommended that everybody consider their own situation.

The afternoon session kicked off with a Q&A with Nationwide’s Head of Property Risk Rob Stevens, Justin Parkinson of Lender Exchange and Ian Robinson, COO at LMS with digitisation firmly on the agenda for all parties, followed by an update from RICS on EWS1 forms.

Thinking about the future, the final session of the day was dedicated to ongoing training and staff development, with the opportunities presented by apprenticeships and funded training providers explored.

The Society offers thanks to Howden and Stewart Title who were gold sponsors again this year and to other sponsors who exhibited on the day.