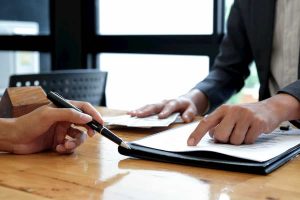 An experienced conveyancer was fined after being tricked into believing that a woman was who she said she was without proof of documentary evidence.

The solicitor had to pay nearly £24,000, including costs, for his misconduct due to failing to carry out any due diligence and appropriate identification checks.

Head of conveyancing at Tait Farrier Graham in Newcastle, Andrew James Daverson, unsuspectingly aided a man in stealing money against a property owned jointly with his ex-wife.

The Solicitors Regulation Authority (SRA) and the Solicitors Disciplinary Tribunal (SDT) heard how the conveyancer had been duped by the man because he did not carry out any due diligence. They heard that the conveyancer had been approached by a colleague to help with a loan application and did not carry out any ID checks on the man or the woman alleging to be his ex-wife, who later turned out to be a phoney.

Andrew said that the man had claimed his ex-wife was at his child’s sports day, when he was told that his ex-wife had to attend in-person. He later returned with an imposter.

Mr Daverson told the man and woman that he would require ID documentation in order to proceed.

The imposter told Mr Daverson that she did not have the appropriate ID with her but would come back later with it, to which Mr Daverson accepted and witnessed the signatures anyway.

Once the money arrived at Mr Daverson’s firm from the lender, he signed an authority documentation for the money to be released to the deceitful man.

In the meantime, the real ex-wife, who resided at the property only learned of the fraudulent activity when the lender demanded full payment of the loan several months later.

She immediately reported the matter to the police but it took nearly 12 months to sort the issue out so she was not accountable for the loan debt.

The real ex-wife informed the tribunal that the matter had caused her ‘a lot of upset’, and her health had been impacted due to stress.

Mr Daverson acknowledged that he did not carry out any due diligence or ID checks or sending out the appropriate documentation when a client is being instructed, which would have raised a red flag and realised the woman was in fact fake.

The tribunal concluded that the real ex-wife had endured ‘significant harm’ from the incident.

“Whilst there was no personal gain… as an experienced conveyancing solicitor the respondent’s failure to undertake some of the most fundamental and basic steps that all solicitors are legally and professionally obliged to complete represented very serious misconduct.”