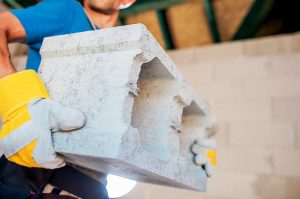 Workloads for the building and construction sector fell into negative territory in the final quarter of 2019 with a fifth (21%) of firms reporting lower workloads.

However, the report suggests that respondents now feel positive about the new decade. Overall, 37% more respondents are predicting higher workloads over the opening quarter of 2020.

The report suggested that employment activity moved into positive territory as 19% more builders reported an increase in staffing levels when compared with the third quarter of 2019.

Whilst the report has found material and wage costs likely to increase now that the UK has withdrawn from the EU, increased political certainty is bolstering confidence in the sector.

“The end of 2019 was a very turbulent period in the UK, both politically and economically, with Brexit gridlock and a General Election. When you consider this, along with the bad weather we saw in October, it is not surprising that the order books of small and medium-sized construction firms took a hit. We know that many consumers were holding off making important spending decisions until the outcome of the General Election was known and this took its toll on workloads.

“Builders are more optimistic for the for the future, however, with over a third of SMEs predicting higher workloads over the coming three months. We are yet to see if there has been a so called ‘Boris bounce’ yet, following the election result, but there are some positive signs. For example, employment levels amongst SMEs have returned to positive ground for the first time since the start of 2019. This of course, brings with it concerns around skills shortages, and SMEs continue to struggle to hire key trades such as bricklayers and carpenters”

“With the Budget due in early March, this provides a perfect opportunity to restore some confidence back into the construction industry. Builders will be instrumental in delivering key government objectives such as 300,000 new homes by the mid-2020s and reaching Net Zero carbon emissions by 2050. Radical policies will be needed to deliver these targets which should include reform of the planning system and a new strategy to make our existing homes more energy efficient.”