CLC Conference Round Up – Referral Fees, Reservation Agreements And Modern Methods Of Construction 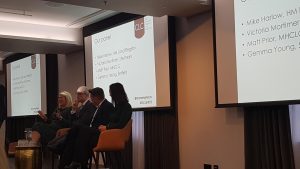 The Council Of Licensed Conveyancers Annual Conference 2019 seemed to have found the perfect location to reflect the political uncertainty, with the choppy, murky and unsettled river Thames below providing a perfect opaque reflection of the year ahead.

Despite the political turmoil bubbling across the river, the beautiful ETC Venues building was packed full of optimistic licensed conveyancers, eager to understand the pertinent issues in a post-Brexit world.

Dame Janet Paraskera, Chair of the CLC, kicked off proceedings by indicating that more information is needed regarding diversity in the legal sector and conveyancing sector; the CLC’s February survey into equality and diversity will look to clarify certain issues and emphasise where opportunities need developing in the future.

Heather Wheeler, Minister for Housing and Homelessness made a number of interesting points concerning the government’s changes to housing reform this year. In particular, Mrs Wheeler highlighted the importance of reducing housing purchase failures and the time it takes to complete a home purchase.

Claiming that the £270 million annual wastage from sellers or buyers pulling out of the purchase and the fact that a quarter to a third of housing transactions fail each year, she highlighted that policies need putting in place to ensure there is a level of accountability.

Here the issue of reservation agreements was brought up. The government’s position that using their standard framework before all property transactions were agreed was made clear during the talk.

To conclude, Mrs Wheeler looked at the governmental position on referral fees. There was a level of clarity that referral fees would not be banned as had been predicted by many. Instead, estate agents would need to operate transparently in making the consumer aware of their rights and the fact that there is a referral cost being applied.

Guidance to estate agents will be available in February at the latest. The government are optimistic that transparency around referral fees will lead to consumer and property market behaviour changing in the future. Whilst she remained optimistic of the reform and work taking place, she left the stage by commenting that “we have a lot of work to do.”

During the Improving the Homebuying Process panel, the issues of technology and reducing completion times were discussed in detail.

Mike Harlow, Acting Chief Executive of HM Land Registry, opened up the discussion by highlighting that improving technology throughout all areas of the property sector and all stakeholders will be the easiest way to improve completion speed and buyer/seller confidence.

Likening the property market to the stock exchange, Mr Harlow contrasted consumer confidence as the main difference. In a stock transaction, trillions are being sold in the blink of an eye; people remain confident in the system because it is tested, trusted and, more importantly, people have the necessary information on their stock purchase before they decide to buy or sell. If this level of instant information is available through technology, the same could happen to property.

The panel were in agreement that reservation agreements are a temporary measure that can be used to improve consumer confidence. If there is a financial loss or penalty attached to leaving a sale, it may deter buyers or sellers from opting so easily. However, it was unanimous that by improving consumer confidence and the speed of completion times, behaviour will shift significantly and reservation agreements will not be needed.

In the last of the panel talks, the conveyancer’s increased responsibility in preventing money laundering was discussed. Despite 38,000 criminals involved in the illicit laundering of money in the UK each year, it was deemed strange that only 58 suspicious activity reports (SAR) were made last year by licensed conveyancers.

There were calls for greater clarity on the processes and procedures used after the source of funds or wealth are ascertained. Should this be the time to reconsider due diligence and whether the firm should work with this person, let alone report them?

Whilst there were certain concerns within the sector, it was refreshing that people were looking beyond March 29th with optimism.