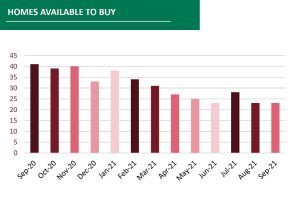 The number of buyers registered per estate agency branch has climbed again in September, up 5% from August and now stands at 458. Property sales activity levels remains buoyant with the number of sales agreed per branch rose from 9 in August to 11 in September according to the latest figures from NAEA Propertymark.

However, with listings falling to below pre-pandemic figures, a fall in transaction volumes is anticipated over the next few months. Although the number of properties being marketed is the same as in August, 23 per branch, year on year this is the lowest figure ever on record for the month of September and a significant decrease from September 2020 ’s figure of 41.

Forecasters are predicting a rise in interest rates to cope with rising inflation and following Rishi Sunak’s Budget a number of mortgage providers have already raised interest rates. Barclays have increased their rates by 0.35% on a range of fixed-rate mortgages and Halifax have announced rises of up to 0.20 percentage points on a range of mortgage products from November 1.

HSBC, NatWest and TSB have all indicated they would be increasing rates.

The cost of moving has risen sharply as a result of buyers paying SDLT but conveyancing and estate agency fees have dropped by 4% and 1%, a sign that competition is returning to the market.

“Figures from September tell an interesting story of a market that may be beginning to shift. Sales being agreed has increased, but the number of sales achieving over the asking price has reduced, meaning we may start to see an end to the bidding wars that have been so prevalent.”

“It’s also interesting to note that although the number of properties available to buy is lower than we have seen before in September, it hasn’t dropped since August meaning that just enough properties are coming to market to satisfy demand.”