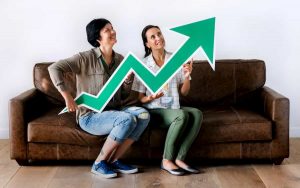 Residential and commercial property transactions for December bucked the statistical trend by producing significant increases over the festive period, according to HM Revenue and Customs (HMRC) latest data.

The 104,670 residential and 10,690 non-residential transactions were 6.8% higher than December 2018 and a 6.2% improvement on November’s transactions on a provisional seasonally adjusted estimate.

Despite a difficult year marred by Brexit and political uncertainty, non-residential transactions also finished positively with a 0.8% increase on December 2018 and 13.4% rise on the figures from November 2019.

The data highlights an upturn in transactions, suggesting an increase in consumer confidence.

The transaction figures align with recent data released by Rightmove which found 1.3 million buyer enquiries since the election at the start of December 2019 and represented a 15% increase from the same period a year ago.

Rightmove also indicated the steepest rise in house prices in the companies eighteen years of trading with properties rising by an average 2.3% in the last four weeks alone.

Agreed sales between December 8th and January 11th subsequently increased by 7.4% since the election as buyer confidence returned to the market.

“It’s normal that people don’t look to move house around Christmas so we’d have expected to see a bit of a fall-off in December’s figures, but that hasn’t happened. After a year of essentially flat-lining, the seasonally-adjusted figures have shown a significant increase in December.

“Taken together with the figures for the two months before Christmas, this is a huge shot in the arm and paints a picture of a real recovery starting to take hold.

“We’re already seeing a strong start to the year and it seems pretty clear that now the election is out of the way, everyone’s feeling a bit more confident and ready to make the moves that they’ve perhaps been putting off before.

“It’s still going to take some time for that to filter through fully so we’re optimistic that the first few months of 2020 could be very positive.”

“The housing market dislikes uncertainty, and the unsettled political outlook over the last three and a half years since the EU referendum caused some potential home-movers to hesitate. There now seems to be a release of this pent-up demand, which suggests we are in store for an active spring market.

“The early birds are on it, with over 1.3m buyer enquiries to agents since the election, up 15 per cent on the same period a year ago. Some buyers are even further ahead and have snapped up a property already.

“It’s still a price-sensitive market, with stretched buyer affordability, so sellers should be careful not to get carried away with their pricing and miss out on this window of increased activity. One factor behind the upwards price pressure has been the shortage of property coming to market in many areas of the country, with some would-be sellers postponing their moves until they judge the outlook to be more certain.

“First-time-buyer activity has remained strong, buoyed by cheap interest rates and the high costs of renting. The downside of this high demand is upwards price pressure, with the average price of typical first-time-buyer property hitting a new record high. However, the annual rate of increase remains fairly modest at 1.6 per cent, less than the rate of growth in average earnings, so affordability has actually improved a little for first-time buyers.”