Today’s Conveyancer Round Table Round Up: Brexit Concerns, Source Of Funds Confusion And Price Transparency Implications 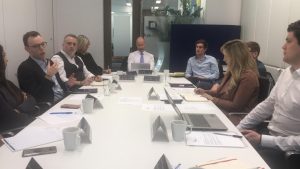 Today’s Conveyancer’s latest round table event enabled the attendees to discuss the pertinent issues affecting conveyancers in 2019. It was unsurprising that the main challenges and concern for the year ahead involved considerations around Brexit, the expectations of conveyancers when it comes to anti-money laundering regulations and the difficult market conditions caused by regulatory changes to price and service transparency.

Many in attendance used the expression ‘uncertainty’ to describe a collection of issues within conveyancing. As house prices and residential property transactions decline, the cloud created by Brexit is certainly shrouding the property market in the unknown.

Whilst some firms in attendance announced that the start to 2019 has resulted in similar figures to last year, many have seen a slight downturn in the quantity of work they are receiving.

One firm has instructed a Brexit consultant to help them weather the storm. It was also noted that a potential post-qualified experience gap in skilled professionals as a result of the last recession could have an impact on the current legal sector.

Anti-money laundering (AML) and the expectations placed on conveyancers was a hotly debated topic throughout the day. The majority were in agreement that AML regulations place significant pressure and challenges on a law firm.

As AML legislation becomes a lot stricter and regulator’s expectations become a lot more demanding on the role of the conveyancer, many were concerned with a lack of clarity that firm guidelines and frameworks would create. Overall, there was a consensus that AML and source of funds legislation needs to standardise its approaches so that the process becomes more holistic and unified throughout the profession.

There have been no two words uttered more by the conveyancing sector than ‘Price transparency’ over the past two years. Despite the regulations having been enforced for three months, the issues are still at the forefront of discussions in the sector.

Whilst some in attendance believed that reviews and staff expertise should be promoted to highlight why a firm’s prices may differ from cheaper competitors, others believed that the regulations offer too much interpretation impacting the way the rules are used from firm to firm.

Many were certain that a change in the philosophy of conveyancers by incentivizing them to pursue clients for reviews will help to promote the firm and improve sales moving forward.

Some claimed that public perception of conveyancers is far more problematic than price transparency; changing the negative opinions of the public and the perceived time it takes a conveyancer to complete a transaction is important for the image of the profession.

How pertinent are the issues and concerns raised in the round table? Do you find source of funds and AML legislation ambiguous? What concerns does your firm have in regards to Brexit? How has price transparency impacted the quantity and quality of the work in your firm?