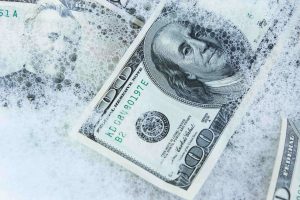 Despite the increasing losses to money laundering in recent years, almost two thirds of industry experts believe that current legislation regarding money laundering is robust and improving. However, it is clear that improvements are still needed.

A new report has concluded that the UK needs a deeper talent pool of Anti-Money Laundering (AML) specialists (33%),  increased levels of information sharing amongst sectors (37%) and having consistent procedures across all sectors by asking regulated bodies like the National Crime Agency (NCA) and the Financial Conduct Authority (FCA) to collaborate and create a more joined up approach if the UK stands any chance of reducing money laundering and fraud (28%).

According to the ‘On the Frontline – The UK’s Fight Against Money Laundering’ report, written by The Economist Intelligence Unit and LexisNexis, money laundering now exceeds £100 billion per year with funds lost to fraud now worth more than £190 billion per year.

The survey, of more than 200 experts in Anti-Money Laundering from an eclectic mix of regulated industries and relevant regulators, has highlighted a need to improve communication in order to stem the flow of illegal funds entering the UK.

Despite a wave of criticism being launched at the legal and estate agency sectors concerning their perceived inaction when writing Suspicious Activity Reports (SAR), the survey has found that only 4% of the panel considered the legal profession and 6% viewed estate agents to be most at risk of money laundering threats.

Although this may be considered surprising given the huge amounts of money that can be laundered through property sales, it was thought that any dirty trail needed to be cleaned before criminals could hide it in the property market. The gambling industry (15%) and investment brokers (11%) were deemed to be popular sectors likely to encounter the exploits of economic crime.

The recently published ‘Economic Crime – Anti-Money Laundering Supervision and Sanctions Implementation’ report found that legal service providers were particularly poor at completing Suspicious Activity Reports (SAR) that form part of a solicitors’ regulatory requirements when it comes to money laundering compliance. Of the 634,113 reports submitted between October 2015 and March 2017, 525,361 (82.85%) SARs were completed by credit institutions and banks.

In stark contrast, reports made by estate agents were a mere 0.12% (766) of the total, with independent legal professionals deeming it necessary to make 4,878 (0.77%) SARs reports. Overall, this means that the property sector completed less than 1% of all SARs reports.

In the past year, the 2,660 reports made by the legal sector represent only 0.57% of the total and a considerable decrease when compared to previous years.

40% of survey respondents believed that improving the use of AI technology, that can help to detect suspicious patterns, could help reporting become a lot more consistent and accurate.

However, 38% were clear that a more thorough and holistic sharing of information could improve the process of completing SARs. Improving training opportunities and improving the legal framework/regulatory frameworks were demanded by over a third of respondents.

The survey group have identified a desperate need for using emerging and existing technologies to help in the detection of suspicious activity, with 32% confident this will improve AML. 29% are looking for an improvement in the reporting of enforcement outcomes.

A quarter believe that only tougher penalties on firms and individuals are needed whilst a fifth (17%) believe reforming SARs reporting and closer collaboration (22%) are the only ways to successfully combat AML issues in the future.

“The report’s findings are undoubtedly concerning. Whilst there has been recent praise for the UK’s anti-money laundering efforts and a number of high-profile initiatives like the Economic Crime Strategic Board have been set up by government to further help combat the issue, the financial crime environment is fast-changing, and so firms cannot be lulled into a false sense of security.”

“Cash or investments into the funds we provide services to originate from individuals or entities via banks, and so there is a risk of receiving laundered funds that have already infiltrated the financial system.

“A rigorous due diligence is required to ensure that no external party looks to use our good name for a veneer of respectability.”

How concerning is the threat of money laundering to the conveyancing sector?