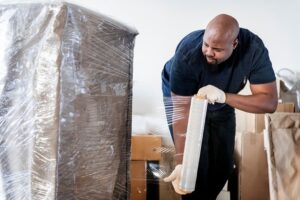 Smaller sales pipelines have sped up home moves by as much as a month according to property portal Rightmove.

With the conveyancing “log-jam” starting to ease, the average time from a sale being agreed until a purchase completes has dropped from an average of 154 days in July to 127 days in October.

The average time between 2017 and 2019 was three and a half months (104 days), so although conveyancing times haven’t fully recovered yet, the time to find a buyer is at an all-time low of 37 days nationally, meaning the total time sellers should be allowing is five and a half months.

Rightmove estimate that the number of home currently going through the legal process is 550,000, less than the 700,000 recorded in June, but still 41% higher than October 2019.

With 1.2m transactions so far this year Rightmove’s analysis also suggests that of the current home movers going through the conveyancing process an estimated 300,000 could complete in time for Christmas. 2021 could see 1.5m transactions, the highest number of sales since 2007, 47% higher than in 2020 and 31% higher than in 2019.

The number of properties coming to market has dipped to pre-pandemic lows. NAEA Propertymark reports that the 23 properties per available branch per branch is the lowest figure year on year ever on record for the month of September and a significant decrease from September 2020’s figure of 41.

Landmark Information Group’s latest Property Trends Report identifies that new property listings were down every month last quarter when compared to the same period in 2019: -6% in July, -13% in August and -8% in September.

“The good news is that people moving home right now are hopefully seeing quicker conveyancing times than those earlier in the year. There’s likely to be a conveyancing rush in December among those people desperately hoping to be able to celebrate the festive period in their new home.”

Since 2014 the number of home sales in a year was pretty consistent at between 1.1 million and 1.2 million, but the effects of the pandemic have disrupted that level this year and we’re likely to end up with the highest number of sales in one year since 2007. More people have been relocating, more have moved to bigger homes, and many made use of the stamp duty holidays.”

“Demand is still remarkably strong for the time of year and sales are up on this time in 2019, and it seems there’s a new group of people in the market. Some are considering if they need to be near a station to commute to work, there are down-sizers realising now is a good time to cash in, and first-time buyers have a renewed energy to find their perfect place in busy towns and cities.”

“Sellers thinking about making 2022 their year to move should be starting to get ready to sell, as if they get going now they could be in their new home before spring next year.”