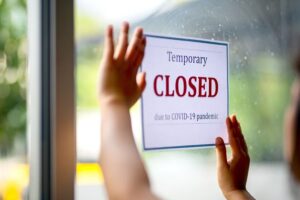 The Financial Conduct Authority have released figures which show that access to bank branches is decreasing, with 267 branch closures between April and June 2021.

The impact on consumers means that 60.1% of the population is within 2km of a bank branch (down from 61.8% the previous quarter), and 87.5% are within 5km of one (down from 88%). 89% of bank and building society branches were still operating on reduced hours in the same period

Meanwhile, access to cash is on the increase with 95.5% of the UK population within 2km of a free cash access point, up from 95.4% the previous quarter.

The figures include post offices, ATMs and mobile banks and post offices, showing that overall there are 60,227 places to access cash without charge – up from 59,903 in a quarter. It has also started adding in places you can get cashback, which pushes the total to 489,709.

But the picture changes in rural areas where 77.3% of the population are within 2km of free access to cash.

The figures have been collated in the FCA’s Access to cash coverage in the UK 2021 Q2. Commenting on the figures, Sarah Coles, personal finance analyst, Hargreaves Lansdown said:

“Bank branch closures risk cutting the most vulnerable people off from their cash. Almost two in five of us now live more than 2km from a bank branch, and goodness knows how far from the bank where we actually hold our account. And while the vast majority of us can still access cash without a charge, without travelling more than 2km, there’s a real risk to those who are less mobile and need help from a human when getting hold of their money.”

The pandemic accelerated the closure of the branch network, and it continued during the spring this year, with another 267 shutting their doors forever. The Post Office offers an incredibly valuable alternative, almost trebling the number of bricks and mortar places people can access banking services alongside a human. However, for many people, these can also prove difficult to reach.”

“The last FCA report looked at access within 1km, 2km and 5km, but this report no longer assesses access within 1km. It would seem to indicate that the FCA has decided 2km isn’t too far to go for cash. Unfortunately, many of the 5 million people who rely on cash are older and have mobility issues. If they don’t have access to transport, 2km may as well be 20km.”