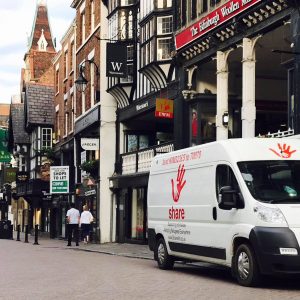 At least 11,000 homes in the UK have been unoccupied for at least a decade.

This is according to research from the Liberal Democrats, which also revealed that just one in 13 councils were using the powers available for local authorities to take control of properties which had been empty for a least six months, otherwise known as empty dwelling management orders.

Figures such as these indicate just how imminent the housing crisis is, as well as questioning whether local authorities across the UK really are doing everything they can to help alleviate it.

In my spare time, I volunteer with a charity in Chester called SHARE, more commonly known as the SHARE SHOP locally, as a shop volunteer and a member of the outreach team.

SHARE’S aims are simple – they support families in crisis and people who are homeless in North Wales and Cheshire and assist refugees fleeing for their lives, wherever they are in the world.

SHARE is a lifeline to Chester’s homeless community – providing hot drinks, food and access to clothing and essential items such as sleeping bags, hats, gloves, scarves, rucksacks etc on a daily basis to anyone in need.

One of SHARE’S main projects is their “Buy a Brick” campaign. The project goal is to purchase a derelict or empty building which can be refurbished with the help of local businesses and trade-persons, enabling it become at least a three bedroom dwelling for a minimum of three homeless people to be moved off the streets.

Their suspended coffee scheme is a huge success. Anyone can buy a virtual coffee, sandwich, or a snack and then the SHARE Outreach Team go out and buy the real drinks and food. The team then hit the streets of Chester in our SHARE VAN and dish out the goodies to our friends who are struggling with homelessness and extreme poverty. The rest of the coffees and sandwiches go onto the suspended board in the shop making them available for those in need to collect whenever they need.

Homelessness is a complex issue which doesn’t just involve giving someone a place to live, it’s about providing support to those who often have multiple and complex needs, such as overcoming alcohol and/or drug dependency, poor physical and mental health, contact with the criminal justice system and histories of traumatic life events1.

Helping them manage the transition from the streets to a home, along with the financial implications surrounding benefits, finding a job and becoming financially stable also requires a substantial amount of support which is there is currently a shortage of.

As volunteers, we know that we can’t solve the homelessness crisis in Chester, but we do what we can to support our friends and make their lives a little bit brighter. I have witnessed an overwhelming amount of generosity from local people and businesses.

All over the UK there are groups of volunteers coming together to provide support in whatever way they can, but my question is when are local councils and the government going to take action to address the homelessness crisis we are facing?