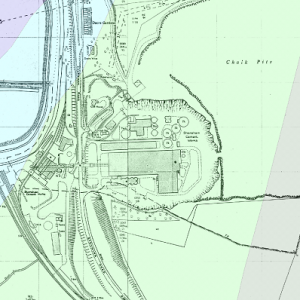 Driving down the A283 towards Shoreham you may have noticed the hauntingly beautiful buildings of the former Shoreham Cement Works. Although partially derelict, the smashed windows, crumbling silos and rusted metalwork tell a story about West Sussex’s industrial significance.

Cement Production
The production of cement begins with the quarrying of raw materials including limestone, clay and sand. These raw materials comprise the basic elements required for cement production which are calcium, silicon, aluminium and iron (1). The materials are crushed and ground into a fine powder before being subjected to proportioning and blending processes. The general proportions used to make cement are calcium oxide (65%), silicon oxide (20%), alumina oxide (10%) and iron oxide (5%) (2). When combined, these elements are added to a coal-fired kiln and exposed to intense heat (1870°C) instigating chemical and physical changes. This produces a new substance called clinker. The clinker is cooled and ground to form a fine grey powder known as cement. The final process involves the addition of gypsum which acts as a setting agent in the cement.

Geology
The majority of the Shoreham Cement Works is situated upon underlying bedrock layers of the Lewes Nodular and Seaford Chalk Formations, with layers of the New Pit and Holywell Chalk Formations in proximity to the west. One of the main components of cement is lime, which is derived from calcium carbonate found in the chalk bedrock layers of the study area. Clay is also present in vast quantities in parts of Sussex which contains silicon, aluminium and iron. This makes the location perfect for cement production by reducing the transportation cost of the raw materials.

History
The site at Shoreham is situated within the Beeding Chalk Pit which has been used since the early nineteenth century. The Beeding Portland Cement Company was founded in c.1878 and began cement production at the site in c.1883, with a recorded output of 144 tonnes of cement per week (3). The location of the works was chosen due to the positioning of the River Adur in proximity to the west, allowing the transportation of raw materials to the site (clay, coal, sand and gypsum) by barge.

The facility was expanded by c.1902 which included the development of several large kilns and chalk wash mills, bringing production to 800 tonnes per week (4). Extensive railway links had also been developed across the pit by this time, which extended off site towards the north west and south west. Further infrastructure was developed at the site between c.1902 and c.1933 however, the works was temporarily shut down for the duration of the Second World War.

The works was completely rebuilt between c.1946 and c.1952, to accommodate the rising demand for cement after the Second World War, and was re-named the ‘Shoreham Cement Works’. The production part of the works was recorded as comprising a chalk crushing plant, several wash mills, a mixing plant, rotary kilns, coal, gypsum and clinker stores, crushing mills and a number of cement storage silos (4). This state of the art design provided hundreds of jobs in the local community and was recorded to have a production output of 550 tonnes of cement per day (3). A number of minor reconfigurations were recorded at the works between c.1952 and c.1980 to increase production and improve overall efficiency.

Production did not cease until c.1991 which was primarily due to the limitations of the old design and the inadequate production in comparison to newer facilities in the area. Additionally, there were concerns relating to the amount of dust that the works was expelling across the surrounding area which posed both environmental and anthropological health risks. Since then the site has been used for various purposes including commercial/industrial storage and as a vehicle repair centre.

What’s in store for the cement works?
Architects have revealed a £1.3 billion plan which aims to transform the quarry into a 100 acre eco-village named Erringham. If plans go ahead, the development will include 2,200 residential dwellings, a health centre, office space, retail units, a school and even an outdoor activity centre (5). The proposed development aims to be eco-friendly by using zero-carbon buses and having a park and ride facility, leaving cars outside the village. The project is designed to incorporate renewable energy and wildlife conservation in order to enhance the beauty of the South Downs as opposed to concreting over it. As well as creating 4,400 new jobs for people in the area, this could be a great example of how brownfield land can be redeveloped as a means of conserving more open space.

The site is currently covered by two Local Authorities, Adur and Worthing District Councils. However, the area also lies within the designated South Downs National Park. Due to the high sensitivity of the site, it is likely to fall under the South Downs National Park Authority (SDNPA), who are ultimately the Planning Authority for the area (6). Although no formal planning application has been submitted, informal discussions are ongoing between the two Councils and SDNPA, all of which have agreed that the project holds vast economic and regenerative significance for the local community.